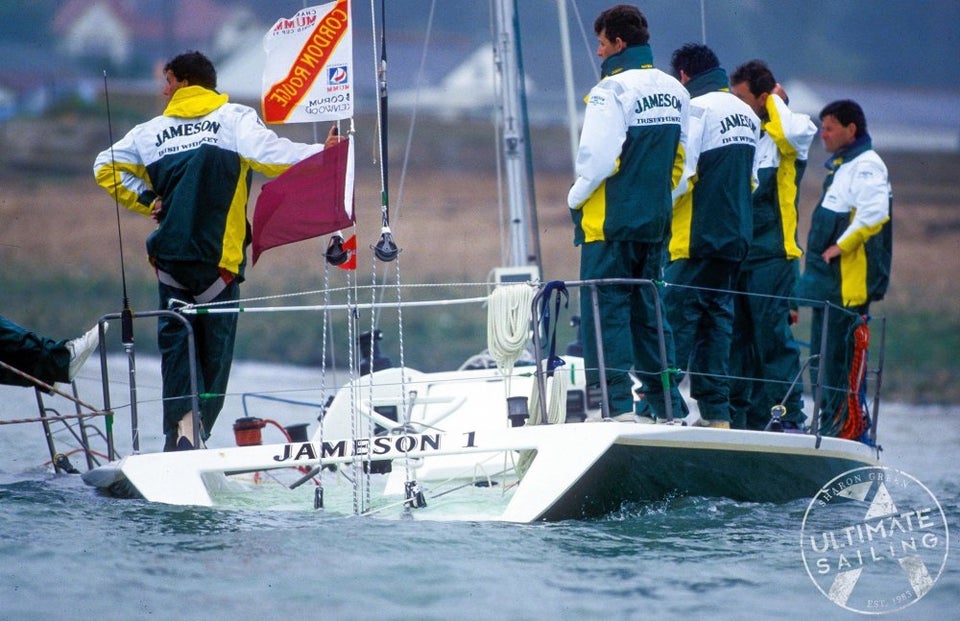 The two photos of two separate members of the Irish Admiral’s Cup Team from way back when brought back memories.

The first picture was taken by Rick Tomlinson and certainly did his early career no harm at all. THE backstory, if I remember correctly was the boats were milling around for the start and Rick already had Jameson in his sights when an almighty gust hit the fleet and laid Jameson flat, not really an awful lot to do with the design, just the unexpected weight of the wind. Here is the second photo.

The best photo of the team boats, or of a specific boat during that Admiral’s Cup is skipper Harold Cudmore (yes THAT Harold Cudmore) cut it too fine along the Cowes shore and took the keel off his boat. The attached photo is captioned “Jameson on the Rocks”. However a more appropriate printing of the photo appeared in the UK newspapers the next day. That’s Cudmore standing on the starboard quarter of the boat.

Normally when a sponsor loses their coverage for most of the event it has a negative impact on the Return on Investment (ROI). However this photograph (or one very similar to it) with exactly that caption of “Jameson on the Rocks” appeared on the front page of many UK Newspapers the next day in the form of an advert for Jameson Whiskey.

Quite how the conversation between the two Harry’s went after the incident I am not quite sure but I do understand that she lived to sail again. -SS.

how the rock was won