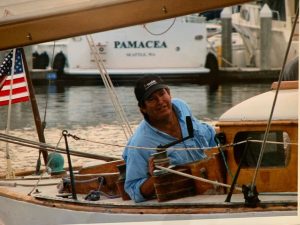 Oh man, this news really bums me out. Butch has been a friend of mine for decades. When I first got involved in sailing here in Diego, some 40 years ago, I somehow ended up doing some racing in Coronado (on Bill Betzer’s Moore 24 Valkyrie), and got to be friends with some of the rats from ‘Nado: Mel Wills, Geoff Davis, Petey Formica, Shawn Powell, Billy Sturgeon, etc.

Butch was just one of the coolest dudes ever – we did a Big Boat Series on a Farr One Ton back in the day and Butch trimmed main. It was by far the hardest job on the boat and he never once complained. Just always had a perpetual smile and a laid back and laconic way that  all of us who knew Butch, loved about him.  He was just a total bro, and I am both proud to have been his friend, and so sorry that he is gone.

Butch, you touched us all, and you will be missed by us all. – Scot Tempesta

Richard Austin (Butch) Parker passed at home peacefully August 3, 2020.  Surfer, sailor, shipwright, competitive yacht racer, carpenter and commercial diver; he and his family have lived in Coronado since 1966. He loved fishing and surfing in Baja and Hawaii; and being a member of the Coronado Yacht Club.

Butch was a talented sailor at an early age; always more at home on the ocean than on land, he has raced and sailed on many of the competitive boats in the club over the years. His wooden boat restoration and fiberglass skills can be seen on many Coronado and San Diego boats. He worked at local and Pearl Harbor shipyards, his finish work skills were always in demand.

Graduate of Coronado High Class of 1976; son to Rick and Sue Parker, brother to Ronni Parker Brega (John) and Steve Parker. Loving uncle to Kira and Kaden Parker, Al and David Brega. Thanks to the Coronado Times.

Boat of the Week