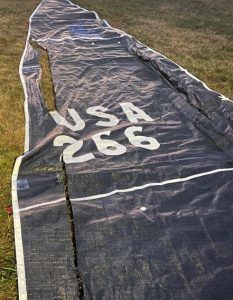 Helluva story from our world-infamous forums!

You don’t expect “Fastnet like” conditions for the Tuesday night beer can race, but we experienced our own storm inshore with some pretty devastating results.  The bottom line is my wallet will be much flatter to replace two sails but all are safe.

J/109 Vento Solare entered the final Jamestown YC (JYC) summer series race with a third place standing.  Weather at the start had winds 8-12 out of the West. It looked like a beautiful night for the race with the potential for some thunderstorms later in the evening.  The crew consisted of Roland on the bow, Eric at mast & tactician, Gardner trimming jib & spin, Mary doing pit & trim, Andrew on main, and Bill on helm.

The West wind required a downwind start since the start line in only 1/4 mile from the shore and we can’t sail upwind into the land on Jamestown. The course had us sailing across the bay to the Newport harbor entrance buoy G1, back to the R12 buoy off Rose Island, over to the R2 buoy just inside Fort Adams, then to the Jamestown harbor finish line. Vento Solare with its PHRF rating of 75 is the “slowest” boat in the spinnaker A class. All went well, and we were in front of two boats that owed us time after rounding the final mark by Fort Adams on the final leg headed to Jamestown.

Over Jamestown we could see many lightning strikes from dark clouds.  About half way across the bay, sheets of rain were falling and quickly overtook us.  Within 20 seconds of the rain hitting us, the winds rapidly increased.  We immediately attempted to drop the sails but were overtaken by the strong winds and knocked over with the port side spreaders in the water.