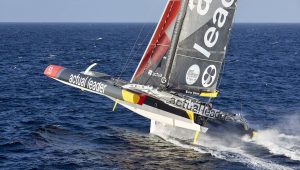 We reported a month ago on the fairly widely circulated rumor that multi-time Vendée Globe and MOD 70 veteran skipper Marc Thiercelin had put together a group of investors to purchase Francois Gabart’s ‘old’ MACIF trimaran. The MACIF team had alluded to the fact that it wasn’t yet a done deal and that there were other buyers in the running, and it has just now been revealed that another party has indeed landed the much sought after 100 footer. Current 32/23 class skipper Yves le Blevec and his long-term partner Actual group have just yesterday confirmed that they are the new owners of the first-version MACIF; still the fastest boat to go solo around the world and the second-quickest boat outright behind IDEC Sport.

A temporary labor and human resources corporation born just one and a half years ago through a merger between the two companies Actual and Leader, we can only speculate that business is booming in a post-COVID economy where more and more companies are opting to out-source many of their labor needs.

As such, the Actual Leader group has made a commitment to sponsor Le Blevec and their newly competitive Ultime program until at least December 2023, including a commitment to compete in the upcoming Brest Oceans race; the first solo round-the-world race for Ultime trimarans. With the acquisition of the new boat, the ‘old’ boat – Thomas Coville’s former Sodebo Ultim, which went around the world in 47 days – will be placed for sale.

Samuel Tual, President of Actual Leader group: “Our Ultim project has now matured, like the company. We need a winning project, just like Yves who has rare experience. The acquisition of Macif 100 gives us access to it.” After 19 years with the same sponsor, skipper Yves Le Blevec is clearly stoked, offering the following reaction, “This new step in our project is probably the most exciting of my life as a skipper. Always in tune with President Samuel Tual, I have built with Team Actual Leader a solid base which allows us to take advantage of all situations. With the acquisition of M100 with potential at the top level, our objectives are bound to be revised upwards, it is terribly exciting. Now I have a machine to win.”

With Sodebo still firmly committed to the class, a new Banque Populaire Ultime under construction, Francois Gabart’s new ride under construction and looking for a sponsor, a new Actual Leader and their now ‘entry-level’ old ride up on the chopping block, the 32/23 Class is certainly looking healthier than it was just a couple of months ago when Edmond de Rothschild pulled the plug on their involvement in the class to pursue their own objectives. As is often the case, big props to the excellent Facebook page ‘Ultim Boat’ for providing the heads up on much of the French offshore sailing scene.  – Ronnie Simpson.