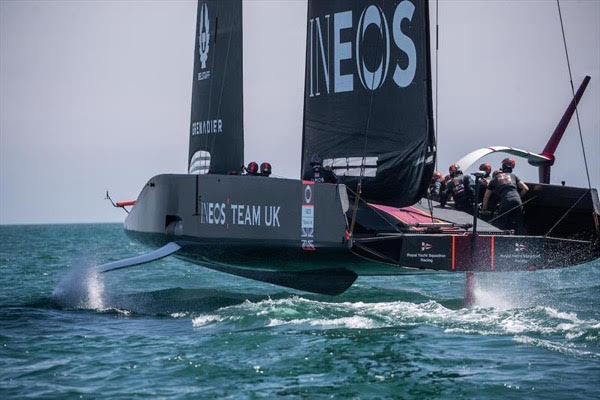 “When you push off the dock, your life is in the hands of computers – and the guy piloting the boat out of the water. All the systems on the boat, other than the winches rattling around, rely on computers. You’re very aware that you are now sailing a boat that wholly relies on computer code.

With the AC72 catamarans in 2013, and then in Bermuda on the AC50, you felt very connected with the boat; you could look through the trampoline and over the side. You could see the water rushing past, so you had a good idea of boatspeed. And you could hear the foils really well – you could tell how fast you were going by listening to the pitch of the squeal.

Now, with these 75-footers, if you can feel and see the environment, you’re in the wind and that’s slowing the boat down. So it’s unlike any boat I’ve ever sailed in terms of feeling, for the vast majority of the crew. It just feels like sailors should hold ropes.”

(Carr is a veteran of five America’s Cup campaigns, beginning with the GBR challenge of 2003. That he can retain a crew position as a grinder is proof of his commitment to physical fitness and the Cup competition. Nevertheless, his frank description of sailing the current AC boats carries a whiff of nostalgia for the days before fly-by-wire racing.)

but it’s just a t-shirt…