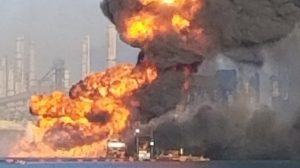 The U.S. Coast Guard has called off the search for two missing crewmembers from the dredger Waymon L. Boyd, which caught fire and sank at the Port of Corpus Christi on Friday. The bodies of two deceased seafarers were located on Saturday morning.

“Our Coast Guard crews worked intently alongside state and local partners to locate the two crew members who remained missing, but unfortunately, we were unable to locate them,” said Capt. Edward Gaynor, the commander of Coast Guard Sector Corpus Christi. “We extend our heartfelt condolences to the friends and families of the missing crew members during this difficult time.”

19 people were on board at the time of the explosion and fire, and six have been hospitalized, according to emergency response agencies. Read on.

you cannot make this shit up