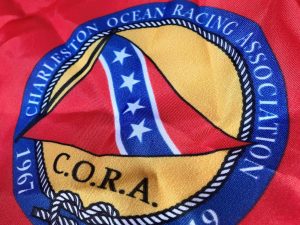 What in the hell is wrong with people? This couldn’t be an easier thing to do, yet that good ‘ol southern racism seems to be a part that some of these rednecks just can’t depart from.  It is appalling and god damn embarrassing  for this sport. I don’t know the standing nor the legality to stop this,  but what are those do-nothings at USFailing doing about this?

Fucking NASCAR took action, but this weak-ass association? I guarantee there will not be one word uttered from them. Unless they send their paid propagandist to help southern ‘splain this to us dummies…

The Charleston Ocean Racing Association, a sailing group that organizes harbor and offshore races throughout the year, voted Thursday to keep its current flag, a symbol that has divided the group with many saying the burgee too closely resembles the Confederate battle flag.

Out of 59 total votes, 37 voted in favor of removing the group’s current symbol, according to CORA member Mark Stetler, who was present for the meeting. A two-thirds majority — or 40 votes — was needed for the motion to pass.

The special meeting of members was called because Commodore Andy Guhl and the board felt it was their fiduciary obligation. Guhl noted that he has received a flurry of emails and other messages criticizing the flag, and that he feared the organization could lose income as a result of it.

The vote could exacerbate the divide within CORA, as several members said before the meeting they might resign or not renew their membership if the organization did not change the emblem.

Guhl said the organization will continue to be an all-inclusive group dedicated to promoting the sport of sailing in Charleston. More here thanks to the Post and Courier.