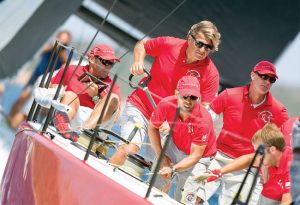 Just as sailors who collect bikes legitimately claim each has a purpose and a use, so Gladiator owner Tony Langley has gathered his mini fleet of three TP52s, each for specific requirements.

The ebullient, passionate British owner may increasingly enjoy the variety of domestic corrected-time racing at home on the Solent and forays to the USA and the Caribbean to race, but the 52 Super Series is his pinnacle challenge.

Langley and his Gladiator team are one of the five crews who raced at the first ever 52 Super Series regatta, Barcelona’s Conde de Godo Trophy, in May 2012. And though his recent schedule has meant missing a couple of Super Series events to race at the New York Yacht Club his pursuit of perfection remains undimmed.