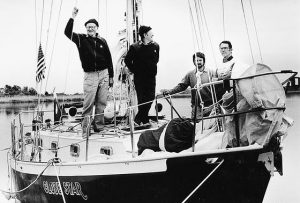 Marvin Creamer — the retired South Jersey university geography professor who is most famous for sailing around the world on a 36-foot sailboat without any navigational instruments — died on Aug. 12 in Raleigh, North Carolina, following hospitalization for a brief illness.

Creamer started the extraordinary journey when he was 68, after teaching geography at Glassboro State College, now known as Rowan University, for nearly three decades.

He is the only known person to have sailed around the world without using nautical instruments. Creamer boarded his steel-hulled boat — the 36-foot “Globe Star”— on Dec. 21, 1982, and spent the next 510 days at sea, navigating his way across the world without even a compass or a watch.

He only used celestial navigation — the relative positions of the sun, moon, and stars — during his journey. His knowledge of water currents, wind patterns, sea color, and marine life also helped guide him, according to a Rowan University biography. Creamer recounted his journey to a Rowan geography class in 2012, and explained his decision to make the trip. “You might ask, ‘How could anybody, sane or insane, get himself in such a fix?’” he said to the class.

Read on thanks to nj.com.

we get hate mail