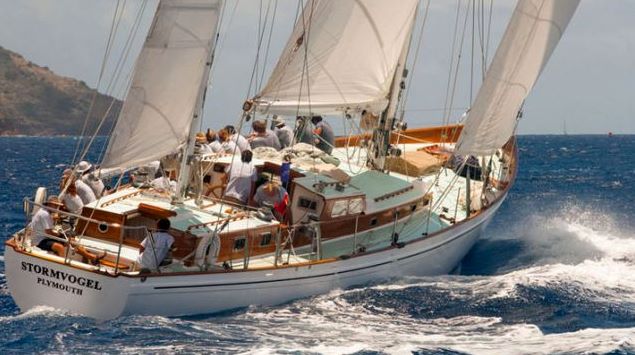 The other day we asked you what this boat was, and now here’s an update.

Stormvogel (“The Storm Bird”) is the ketch used in the Australian film Calme Blanc. Before being a movie star, this sailboat was the first very light maxi, ushering in a new era. It was built in 1961 in South Africa.

This boat was commissioned by Cornelis Bruynzeel. This man is known to have invented marine plywood. For Stormvogel, he had three architects worked according to their availability. Thus Van de Stadt designed the hull and the appendages, John Illingworth the sail plan and the deck layout, Laurent Giles the interior fittings.

This sailboat was a pioneer with a very light displacement (barely 31 tons for more than 22 m) and above all a rudder separated from the keel (a first for the time which is now used on all modern sailboats). The hull is in molded wood (4 mahogany plies glued with the resin invented for the marine CP) but the deck is in plywood. Subsequently, this plan was used to produce polyester series sailboats under the name Ocean 71.