by hook or by crook 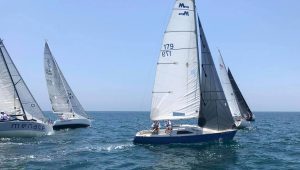 Del Rey Yacht Club starts off each New Year, by drawing over 80 boats for The William Berger & William Stein Series, Malibu and Return Race. This year, everything was on track as it has been for over 45 years, with Race 2 of the series, The Santa Monica Bay race following in early March.

We held off as long as we could, before abandoning race 3, The Pt. Dume Race. We hoped that Races 4 and 5, The Cat Harbor Layover and Eagle Rock to Marina del Rey would still be run in June. By late April, all local racing had either been cancelled or postponed.

In early May, we hatched a plan to get our members and friends back out on the water safely. We created a new series, The Single/Double Handed Series, to start in late June. To get the support of our Vice Commodore and our bridge simple but logical rules were proposed:

Double handed crew must reside under the same roof, no spinnakers, 2 crew on the RC boat (one on the bridge, one in the cockpit) and self-finishing. With just 2 weeks of promotion, our first race had 22 entries and by race 3, we had 25. A Virtual Happy Hour and Awards Zoom meeting follows each race. At the request of some of the racers, we added some additional courses for race 3 and everyone has told us how much they appreciate being able to race.

Yes, there were a couple that tried to cheat on the “under the same roof” rule, but they were easily figured out. Fortunately, no one put on a dress and tried to claim they were the skipper’s wife. We have since, adopted the same rules to our Friday night Sundown Series and hope it too will grow./

So take a safe chance, adapt an existing race or come up with a new one, or it may be a very long end of summer and winter with no racing.