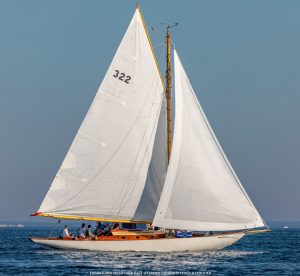 A fleet of 46 boats competing in eight classes started and finished its circumnavigation of Martha’s Vineyard on Saturday, August 1. In a virtual Awards Ceremony, held Sunday afternoon, Kerry (who also is a former U.S. Senator for Massachusetts) praised host Edgartown Yacht Club for pulling off the regatta during the Coronavirus pandemic, which sadly has caused the cancellation of many other regattas.

“The Club did a brilliant job — thoughtful and well executed, without onerous but, nevertheless, clear restraints,” said Kerry, mentioning particularly the restriction of no social gatherings at the club. “That’s a hard thing to give up in sailing, but it was hugely appreciated that they covered all the bases and it allowed us to get out on the water.” Read on.

too close to the fire?