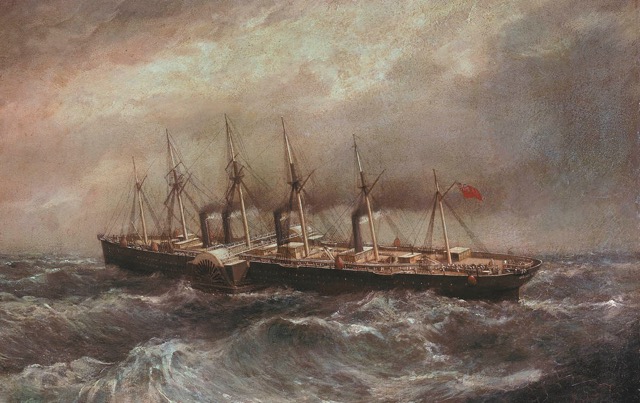 “The fine weather held as she made her way down the Irish coast. Off the Fastnet, to the joy of her passengers, she overhauled a Black Ball packet, the Underwriter, and left her plunging unhappily into a head sea. She forged ahead with magnificent unconcern. ‘Wonderful!’ said her passengers, and declared that the day of discomfort at sea had passed.

But noon saw the wind veer to the north, and before long the Great Eastern was showing them what she could do in a heavy beam sea. She could, it appeared, hang on the roll, and that made death seem all too close. Many thought she would turn right over, and behaved as people do when unused to contemplating eternity before their allotted span. Finally, the sea caught hold of her, tore off one of her paddle wheels and swept away several boats, and left her wallowing in the trough – unmanageable. Her rudder stock had gone.”

(At the time of her launch in 1858 the SS Great Eastern was by far the largest ship ever built. Designed by civil engineer Isambard Kingdom Brunel and constructed in iron, her combination of sail and steam-powered paddle wheels was never a success. She ended her days as a floating music hall and was broken up in 1889.)

you know what it is