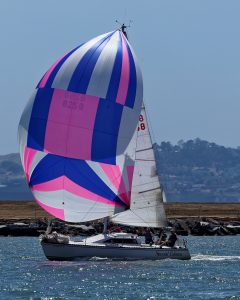 So this Code 0 thing. When I was working as a sailmaker for Dee Smith, (poor bastard. – ed) I was very involved in a Wilderness 30 which I was about to race to Hawaii in the 1982 SF to Kauai race. I had done the previous one in 1980 on another Wilderness 30 and felt we could do a little Turbocharging.

We moved the spinnakers up to the masthead about 5′ taller. Made the spinnaker poles 20% longer. We decided to build a free flying wire luff masthead Jib. It was very large out of the early 2.6 oz. taffeta/mylar. We called it our “Jumbo Jib”. It was amazing!

We could sail pretty close to the wind in light air at wind speed or greater. For handicap reasons we claimed our masthead as our “I” measurement and our 20% longer pole as our”J” measurement as back then there was no provision for such a sail. We used that sail for many years in coastal Nor Cal to So Cal ocean races with unreal success.

OK that’s my Code 0 story. – Ironically, here is a pic of us with a symmetrical from back in the day.  – Dave Hodges, (NoCal guru – ed)

Viewer from the Sewer, Killer Venue