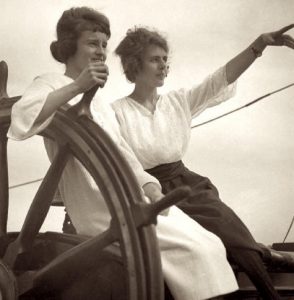 “The aquatic fete consisted entirely of evolutions, free of racing, and concluded with the entire squadron being photographed at Double Bay.

The  steamers Admiral and Cammeray conveyed visitors to the scene. The last named was crowded principally with ladies — relatives and friends of those more actively engaged in the fete.

During the first hour there were from the ladies expressions signifying that the sight was lovely, enchanting, and good, but as the afternoon slowly wore away to be nearly four hours on the excessively crowded Cammeray, watching aquatic evolutions free from the shadow of racing, at points often too far away to see anything exciting, even if it did take place, was not rapture unalloyed.”

The Daily Telegraph – The ladies were not amused, Sydney, (1885)

(“Evolutions” – the parade of vessels in close formation responding to speed and course variations signalled from a flagship – were a popular amusement among the ‘Royal’ sailing clubs. The rituals were an echo of “ships of the line” naval battle tactics.)