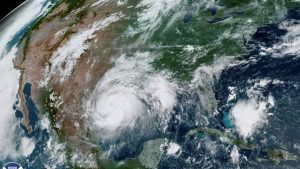 Summer time is in full swing for many Anarchists, and while that may mean good sailing it also means that hurricane season is upon us. Just as Hurricane Hanna was raging it’s way ashore on the Gulf Coast of Texas, Hurricane Douglas was making it’s way towards the Hawaiian Islands.

These two storms may have both been Category 1 systems but their impacts couldn’t have been more different. Hanna created incredible amounts of storm surge, flooding and general chaos which sank multiple boats, while Douglas threw out the playbook and merely provided a bit of wind and rain and some pretty good set waves for surfers based on Hawaii’s north and windward-facing shores.

Among other carnage in Texas, authorities rescued three people off a sailboat that sank in Corups Christi Marina, a Gemini 105 catamaran sank at the dock (an improvement if you ask us) and a popular pier partially collapsed while the community at large is still dealing with the fallout from this early season storm in what is predicted to be a very active season.

Just to underline how active this season may be, Hanna – an ‘H’ named storm – hit Texas nearly a month earlier than Hurricane Harvey did so three years earlier. In fact, when Tropical Storm Fay made landfall in New Jersey a few weeks ago, she became the earliest ‘F’ named storm to make landfall on the eastern seaboard since modern meteorological records began being kept back in the 1800s.

Out west, things are also beginning to heat up as Hurricane Douglas has shown. Before sliding north and missing the islands, Dougie had taken direct aim for the Aloha State in what could have likely been the opening bell for a La Niña season that is also predicted to be quite active. Not to worry however, with the COVID-inspired toilet paper and paper towel shortages appearing to be behind us, we’re sure our illustrious commander and chief will be there when we need him most during this hectic hurricane season.  – Ronnie Simpson