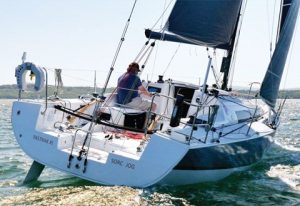 There always seems to be a new wrinkle to iron out of the racing rules. When the Cruising Yacht Club of Australia decided to introduce a two-handed division in this year’s Sydney-Hobart race the initiative was seen as a timely development in the 75-year history of the event. Two-handers now compete in the Fastnet Race, and there will be a mixed two-handed offshore event in the Paris 2024 Olympics.

But the ‘conventional’ owners who race fully-crewed yachts in Australia soon spotted a catch. In accordance with common practice established in Northern Hemisphere short-handed events, the CYCA confirmed it would allow two-handed entrants in Hobart 2020 to use autopilot – mechanical helming guided by computer navigation.

That ruling makes perfect sense on safety grounds. The two-handers can expect to be at sea for up to four days completing the 628nm distance from Sydney to Hobart. There will, inevitably, be times when the need to handle the boat and its sails must demand the combined efforts of both crew working together. And if one sailor becomes injured, exhausted or ill, their crew-mate cannot steer forever.

The problem, though, was that the CYCA Notice of Race for the Sydney-Hobart made it clear that the double-handed yachts would be eligible for the Overall IRC winner’s prize – the Tattersalls Cup. That’s the point at which a powerful group of owners of the elite fully-crewed yachts dug in their heels. Surely, they argued, autopilot – and the sophisticated routing software that now drives it – would be an unfair advantage.

They had a point. Any decent auto-helming system now drives better than most humans, especially downhill. The basic RRS rules specifically prohibit mechanical assistance of this kind. If the short-handers are to race alongside conventional IRC entrants in the same division, then shouldn’t the same rules apply to all?

After a brief, discreet – and thankfully bloodless – skirmish between the owners and the club, the CYCA has now decided to amend their Sydney-Hobart NoR. Common sense has prevailed. Short-handed yachts that choose to use autopilot will compete in their own division, but not be eligible for the Overall prize.

There is, of course, a hidden irony in all this. Many of the same owners who complained about the unfair advantage of powered steering themselves campaign yachts with powered winches, canting keels and water ballast. Maybe they, too, should race in a separate division – and give the crews who still get to Hobart by human power alone a better chance of winning the main prize.