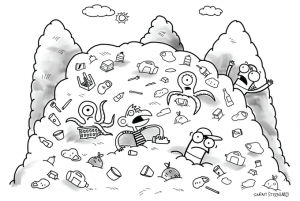 Since the Steenland family left Australia on their 41ft cruising yacht 5 years ago, they’ve become obsessed with getting crap out of the water and keeping it out – and they’ve been getting on with it too. (you may recall that Sarah Steenland is the creator of excellent sailing cartoons! – ed.)

And after setting up more than 20 plastic recycling enterprises in small communities, running educational efforts and much more, they’re now on a crowdfunding drive to scale up their upcycled ocean waste bag range on Kickstarter – which doubles as an impressive social enterprise.

Carlos Steenland, Captain, father and CEO of The Sea Monkey Project, said: “I find it so sad that when I was a kid my mum and dad took us sailing and on the islands and beaches we hardly ever saw garbage. Now when I take my kids there they get the CRAP experience and have to watch crabs living in bottles rather than shells, or dead coral that has fishing net dragged over it.

“And it frustrates the hell out of me that I have to dive into the water to clean something off our propeller or anchor. And the fact that when we go to these remote beaches we have to share it with rubbish from EVERYWHERE. We have to sit down amongst it.

“I want to show my kids that they can make a difference even though they are only one person. But over time they can have a big impact.”

The whole Steenland family works together on The Sea Monkey Project, which is headquartered in Malaysia: Carlos leads the expansion of plastic recycling industries; Sarah creates educational programmes; daughter Sydney (15) is a spokesperson and activist for environmental causes and runs youth initiatives; and son Indi (12) helps to lead plastic recycling workshops and does related video editing and animation.

The Sea Monkey Project’s kickstarter seeks to generate in US$10k in 30 days through pledges starting as low as $1. It will use bag production and sales to scale up their broader impact in five areas:

Regenerating critical mangrove forests through a partnership with EarthRestoration, which plants 1 mangrove tree for every bag sold by the Sea Monkey Project;

Boosting the reach of their environmental education workshops and programmes across South East Asia;

Generating a livelihood for the refugee workers who hand craft each bag sold by The Sea Monkey Project, most of whom have escaped violence in their home country and struggle to gain other employment;

Empowering mothers in indigenous Orang Asli communities by providing a source of financial independence through the operation of plastic recycling enterprises; and

Expanding clean up efforts through partnerships with organisations such as The Rumah Hijau (Green Home) on Tioman Island, Malaysia, which collects discarded fishing nets tangled in mangrove forests, and manages “waste” from restaurants and resorts.

Carlos says: “The most satisfying part of our job is seeing small local communities happy, having people thank us for trying to make things better and finally knowing that we are showing our kids that there is another option out there and that they can make a difference.”