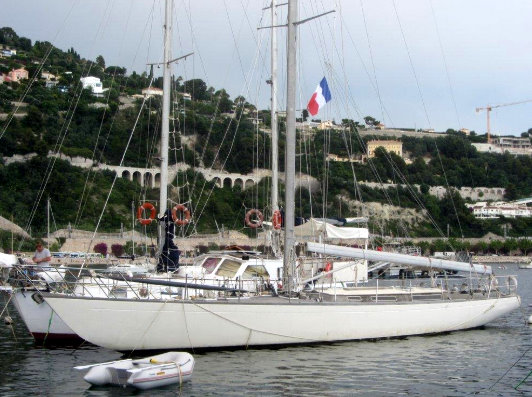 It seems that good news travels slowly from Europe. Here’s a further update on the fate of the classic Australian 12 metre Dame Pattie.

Still carrying her original KA2 sail number, the yacht was sold last July under the authority of the Conseil Départmental des Alpes-Maritimes to recover unpaid dock fees after the yacht lay abandoned for four years at her berth at Villefranche-sur-Mer, near Nice on the French Riviera.

Dame Pattie, named in 1966 after the wife of the then Prime Minister Robert Menzies, fetched €126,000 (around $200,000). Had a buyer not come forward it is likely the local authorities could have ordered her destruction and a vital part of Australia’s yachting heritage would have been lost.

The classic 12-metre, designed by Warwick Hood and built in Sydney by Billy Barnett, was dubbed “Damn Pity” by dockside wags after she lost four straight races to Intrepid in the 1967 America’s Cup series at Newport before returning to Melbourne.

The story behind Dame Pattie’s subsequent departure from Australia is interesting.  In the run-up to Australia’s next challenge in 1970, Gretel II owner Sir Frank Packer asked his helmsman, Jim Hardy, whether he’d like him to buy Dame Pattie as a trial horse. Hardy thought that was a wonderful idea, but the sale never happened and Hardy had to hone his tactical skills against Vim and the first Gretel.

Alan Payne, Gretel II’s designer, later explained how the deal that would have kept “The Dame” in Australia fell through.

It seems that Sir Frank had a conversation with Emil Christensen, the chairman of the syndicate that owned Dame Pattie, and came to an agreement on the sale. But Christensen then told Sir Frank to put his offer in writing. Packer was a tough old businessman who believed a handshake should be all that was required.

“You want that in writing?” asked Sir Frank. “Oh yes,” said Emil. Sir Frank’s answer was blunt: “Well, then the deal’s off!”

Bought by Canadian yachtsman G.W.O’Brien in 1970 Dame Pattie was re-named Endless Summer and converted to an ocean racer with a cluster of seven hefty winches around the cockpit. O’Brien campaigned her from his home port of Vancouver, British Columbia, for more than a decade.

In 1989 she was acquired by another Canadian, Lawrence Lambert, and given a new interior fit-out modeled on the Swan 65. Lambert changed her name back to Dame Pattie but adopted a new sail number, KC87. In 2008 the 12-metre was bought by Danish architect Mads Buhl. He kept the yacht in the Saint Tropez region of the Riviera and finally returned her registration to KA2. But it appears that Buhl lost interest in yachting, stopped paying his mooring fees and allowed her to languish.

Dame Pattie will never be a true 12-metre again, but classic yacht racing enthusiasts will be pleased to learn that the survival of this important part of America’s Cup history now seems assured.

The IMOCAs They Are A’ Changin’