from the hook playing field 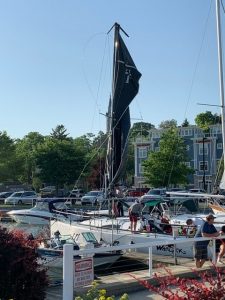 Great post from a great thread in our world famous forums, brought to you by Marlow Ropes… Not everyone had a great race, as evidenced by the photo here.

Did the race on T10 Winnebago with a crew of 5. We were far enough ahead (early start and we got away well) to be on the north side of Milwaukee when the first shit hit. We could see wipeouts and all manner of clusterfuckery behind us as storm decimated the fleet and then the wind came north to us.

We were with another T10 and played a game of chicken with them as to who could leave the kite up longest. Hard to take it down, as we were flying (OK T10 flying) in the 30 knots and following seas. We blinked, and they dropped 2 minutes later. We beat our spin speed max under jib and main while the storm drove through. Bit of a lull in lumpy seas after the storm passed, good time to break out the grill for dinner.

Pressure back on and we clicked off the miles under spin and a starry sky. Around Sheboygan the sky started to darken and we could see but not hear lightning everywhere. But we were flying so all good, press on. Then we could hear the lightning, and the rain started. Kept the kite up as long as it seems sane, and lucked out and dropped it just before the shit started to hit. Driving rain and 45 knots of wind, so manageable and still making good VMG. 45 minutes of this and a bit of a lull, so we put up the jib.

On queue, it then gets absolutely atrocious, continuous lighting and 65 knots of building breeze. We tear down the jib and sail under full main in basically survival mode. Wind in every direction as the storm rotates above us. Finally it gets less crazy, and we can turn towards the Porte du Morte, about 30nm due north. Another lull at dawn, some rain, and life is feeling pretty shitty. But then it fills in from the west, and we close reach to the turning mark, a USCG buoy that wasn’t fucking there.

Through the Porte and it looks like a champagne sail into the M&M, but christ there is another T10 200 yards behind us, and we dual fangs out all the way to the finish. Funny but we ran into that J92 like 4 times on the course, and finished a minute or two behind them. Great times!

this is how they did it