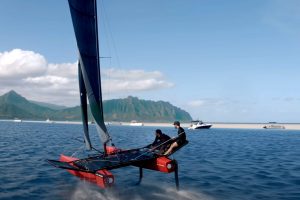 When he isn’t out racking up World Surfing Titles, Hawaiian waterman John John Florence has been making some pretty notable voyages under sail. From his impressive 2nd in Division, 4th Overall in the 2018 Sydney to Hobart to chasing surf in the Central Pacific onboard his Gunboat 48 with the likes of Jacques Vincent, Florence has been tearing it up under sail since he was just a grom destined for success on the North Shore. With the WSL just announcing that the season is officially cancelled for 2020, John has been afforded some much needed R&R at home, and we’re glad to see him making the most of it.

Embarking on one of his most extreme sailing journeys yet, Florence and Maui-based waterman Kai Lenny have just sailed across Hawaii’s longest channel – the Kauai Channel – on John’s Flying Phantom 18’ foot foiling catamaran. Information is still scarce, but judging by the boys’ Instagram stories and from brother Nathan, it looks like John and Kai crossed the channel in about 9 hours, arriving into beautiful Hanalei Bay on the North Shore of Kauai. They look to be going along nicely in this video of them training offshore of Kaneohe a few days ago.

If your name’s not Kelly Slater, surfing on tour has a very limited shelf life and with John’s persistent knee problems sidelining him for much of the last two years, we’re stoked to see John continue his skyward progression in the sport. Young, rich, connected and ultra-talented, John could certainly make his mark on the sport of sailing if he were to choose to.

For Kai Lenny, he’s now foiled every major channel in Hawaii and can now add ‘foiling catamaran’ to the extensive list of craft he’s foiled across the Hawaiian channels. – Ronnie Simpson.