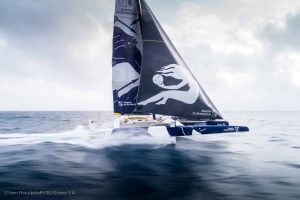 While the backmarkers of the IMOCA fleet are still sailing into port in Les Sables d’Olonne, another fleet of nearly 80 boats is preparing to take on one of three ocean courses beginning in Cherbourg, and ending in La Trinite sur Mer, on France’s west coast.

While 3rd running of the Drheam Cup will include everything from Figaros and Class 40s up to IRC divisions and Multi 50s, it is undoubtedly the Ultime trimarans that will steal the limelight. The first engagement of the season for the now-deceased and stagnating 32/23 Ultime class, nonetheless, three of the monsters will face off in an 1100 mile showdown this weekend.

Beginning in Normandy on Sunday and then heading across the English Channel and up the coast, the big tri’s will sail up the Irish Sea to round the Isle of Man before running back down to Fastnet Rock and onto the finish in Brittany. For the Maxi Edmond de Rothschild team and Sodebo, it will be their first time sparring since the Brest Atlantiques, when Gitana 17 took out a convincing win while Sodebo was on a voyage of discovery with their brand new boat.

Half a year later, both teams have popped out of the shed with significant improvements and new configurations as both of them are planning a winter-time assault on the fully-crewed Trophée Jules Verne. For Gitana 17, they certainly look the most refined and with both Franck Cammas and Charles Caudrelier leading a six-man squad that includes Morgan Lagraviere and stand-in Yann Elies, they will certainly be tough to beat. For Sodebo, Thomas Coville and crew have been on the water a lot recently, both in full crew mode and also in ‘false solo’ mode. For this race they’ll be full-crewed but only foiling on on side.

With a starboard foil stuck in Italy due to COVID-induced delays, they’ll likely be hampered around the course on this race but should continue to make development gains for the long-term Trophée Jules Verne goals. And for Yves le Blevec and Actual Ultim (Thomas’ old Sodebo), they will again be the underdogs compared to the newer foilers, but with a boat that went around the world in solo form in 49 days, they could still be in the hunt if conditions get nasty or if either of the foilers sustain damage. Also, they’re sporting a gender-equal crew with 3 girls onboard!

As a low to the north of the UK dissipates and a new High forms to the southwest, the race looks like it will be dominated by a moderate northerly flow over the UK and France. For a diverse coastal course that includes a lot of upwind and reaching before being more off the breeze in the second half of the course, the big tri’s should get reasonable conditions and consistent enough breeze to stay at top speed all the way around the course and put up big numbers on the final run to the finish.

Franck Cammas ran the routing five days before this writing, and said they should be able to make it around the 1,100 mile track in 48 hours, which would be a remarkable achievement and a further testament to how fast these boats are in virtually all conditions.

Behind the Ultimes will be an impressive fleet of about 25 Figaros sailing a shorter course of just 428 miles across the English Channel and up the coast before turning south and heading down to La Trinite sur Mer. On the middle course meanwhile, a dozen Class 40s and a trio of Multi 50s will run the same course but 300 miles further as a trip around Fastnet Rock is included.

Hot on the heels of the incredibly exciting Vendée – Arctique race, the Drheam Cup further represents a much needed return to racing and normalcy for the sailing world. After months of desperation, we’ll have both the Vendée Globe and round-the-world record attempts to follow before we know it! Good info on the Drheam Cup is pretty scarce, but as usual our forums are one of the best ways to find it.  – Ronnie Simpson.

Americas Cup News – the NZL AC75 back in Auckland