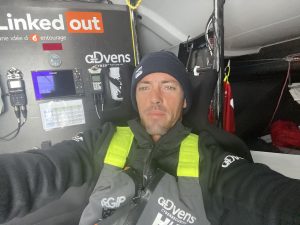 Thomas Ruyant regained the lead of the Vendée-Arctique-Les Sables d’Olonne Race at exactly the right moment today as he became the first skipper to round the turning mark off the southwest corner of Iceland.

Ruyant on board LinkedOut had been in third position behind Charlie Dalin on Apivia and Jérémie Beyou on Charal as the leading trio approached the IOC-UNESCO Waypoint southwest of Iceland in very light and fickle winds.

But staying to the left of the pair ahead of him, he tacked inside them in the final approach to the mark and rounded the virtual corner on this unique racetrack just a mile ahead of Dalin, with Beyou three-and-a-half miles back in third position.

Ruyant dominated the early stages of this mainly upwind course before dropping to third place during the traverse of the depression west of Scotland. Towards the end of his fifth day at sea, he is now heading south into a building westerly airstream that is rolling off the top of a high pressure system located about 550 miles due south of LinkedOut’s bow. More.

no big mac for you