Here is the restoration story behind our latest What is it? feature. 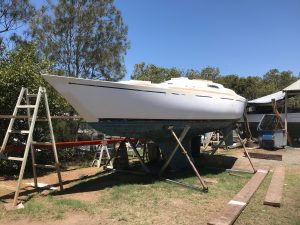 Not all old boats should be restored. Only the special ones. And what makes one special?

Thirdly, boat must still have a purpose and use today. Lastly, when it is all said and done, can you say it was worth it. After four wooden boat restorations I have learnt more than most.

The latest project was “Defiance”

Sparkman & Stephens Design 2098, from a time when S & S ruled the world and Sydney boat builders  were turning out S & S classics like Ragamuffin, Salacia and Love & War. Built by the legendary boatbuilder Doug Booker and launched in December 1972, “Defiance” is timber being triple planked Oregon on laminated frames with a Australian cedar deck. For the time the best of its breed.

All up about 150 GRP production “Defiance 30s “ were built over a 25 year period but Defiance was the first of the design and gave its name to the class. Defiance and her sisterships were a mainstay of the Australian ½ ton fleet until the East Islanders  (NZ) came across in 1975. 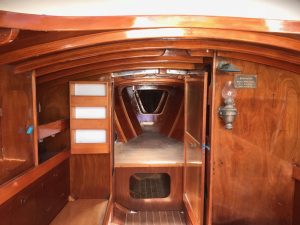 But to move ahead, by 2002 it had been lifted out into storage yard  with the owner living overseas. By 2015, the storage yard was to be redeveloped and if the boat was not shifted by the following Friday, it was to be cut up and keel sold for scrap.

So track down owner in the UK, with two days to spare, do the deal, get the uninsurable boat relaunched and tow it 30 miles hoping the pumps keep up. Late 2018, relaunch, prepare for sea and get the 1000 nm to the  Australian Wooden Boat Festival in Hobart. Thanks the legendary Jimmi Magician, we made with a day to spare.

So back to the list:  Iconic boat, the best of its time, tick. 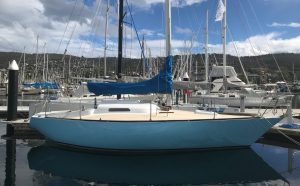 Special to good people, well we seemed to have own private dock party for old crew and friends every day of the Festival. Even some of the original build team turned up. Defiance now lives on Southern Tasmania and makes an ideal shorthanded small cruising boat for those parts as it does get rather windy at times.

And was worth it, at least to me if no one else but that does not mean I did not sometimes doubt the worth of the undertaking as I went along. So pick the boat carefully and understand it will take a lot of time to do it right.