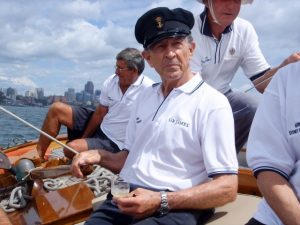 “I’ve spent a large part of my life in, on, and around boats – simply messing about – and an enormous part of that messing about has been the wonderful fun to be had with all the people involved.

Yachties are a special community. You can’t spend a decent stretch of time sailing with anyone and not get to know quite a bit about them – their likes and dislikes, their strengths and weaknesses. If you’ve gone to sea together, then it’s quite literally a case of putting your life in their hands, and vice versa. Not many sports demand such a high level of trust between team-mates. That’s one of the many aspects of ocean racing that make it so special. It’s not just a test of skill and endurance, but of character as well.” – Sir James Hardy OBE – Foreword to All Piss & Wind (2007)

(Jim – later Sir James – Hardy competed in the first of his many Sydney-Hobart races in 1957. He won a World Championship in the 505 dinghy class, represented Australia at the Olympics and Admiral’s Cup, and skippered three Australian challengers for the America’s Cup.)