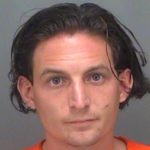 We can just never get enough of these stories…

There’s likely a stern punishment in store for this alleged criminal.

A Florida man reportedly stole, crashed and then abandoned a yacht worth almost $1 million in March, evading police for three months before being arrested last week.

The nautical no-gooder, 28-year-old Donovan Russell Jester, stole the boat from a dock in St. Petersburg, Florida, then left it after crashing it into channel-marker pilings, according to the Pinnellas County Sheriff’s Office. Read on.