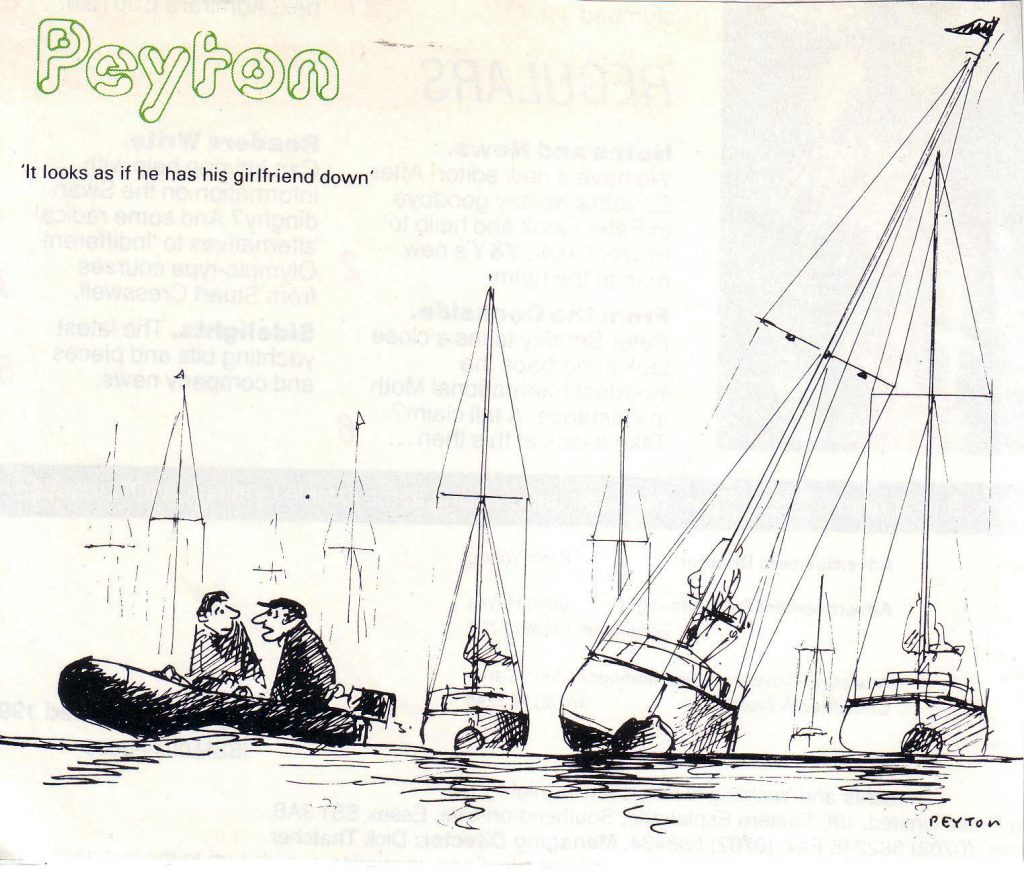 I have been a fan of the subject of this book for more years than I would care to admit remembering. It started way back with the UK’s, now defunct, bi-weekly ‘Yachting & Boating and for many years the first two items I searched out in Yachts & Yachting was his work and Fish-Eye. I used to cut the items out and latterly scanned them

To call anything or anyone “The World’s Greatest” anything could be said to be bordering on the pretentious but with this gentleman there is no close pretender to the throne, never mind equal. The book is simply called “Peyton, The World’s Greatest Yachting Cartoonist” and anyone who has seen a ‘Peyton’ would find it hard to doubt the voracity of the title.

Unlike many biographers who write about their subject from a distance Dick Durham of Yachting Monthly spent time with Mike Peyton and his wife Kath, herself a successful novelist and was regaled with stories of Mike’s life from his early days as a miner’s son through his exploits in the war to a career, not only as a yachting cartoonist but in many other publications as well.

The beauty of a Peyton Cartoon is that most of them either have happened or nearly happened to yourself or someone you know. A keen sailor right from when he discovered the pastime all the way up until he could no longer sail the book tells of the family’s early struggles and tough life through to both Mike and Kath being recognised for their outstanding talents.

Mike Peyton passed away in 2017 just days after his 96th birthday but his art, because that is truly what it is, lives on.

The cartoon I sent to The Editor with this piece struck a particular chord with me from my early days with my first boat with a lid and as well as collecting the individual cartoons I have never been able to stop myself buying those books published of collections of his work.

This is one book I would recommend along with any of the books of his cartoons, all guaranteed to lighten a darkened mood to any keen ‘yachtie’ and they can be re-visited time and time again. I hope the unashamed promotion of his work will give me forgiveness for the unashamed posting of his work.  – SS.