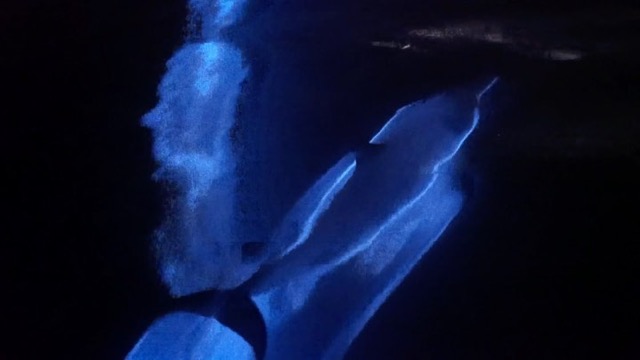 “The passengers were sent for, to come up in the bow and see a fine sight. It was very dark. One could not follow with the eye the surface of the sea more than fifty yards in any direction. But if you patiently gazed into the darkness a little while there was a sure reward for you. You would see a blinding flash or explosion of light on the water – a flash so sudden and so astonishingly brilliant that it would make you catch your breath. It was porpoises – porpoises aglow with phosphorescent light. They presently collected in a wild and magnificent jumble under the bows, leaping and frolicking and carrying on, never making a miscalculation, though the stem missed them only about an inch, as a rule.”

(Mark Twain – real name Samuel Langhorne Clemens – embarked on a lecture tour of Australia to stave off bankruptcy after his disastrous investment in a typesetting machine. He wrote that Australian history is “like the most beautiful lies, but they are all true.”)