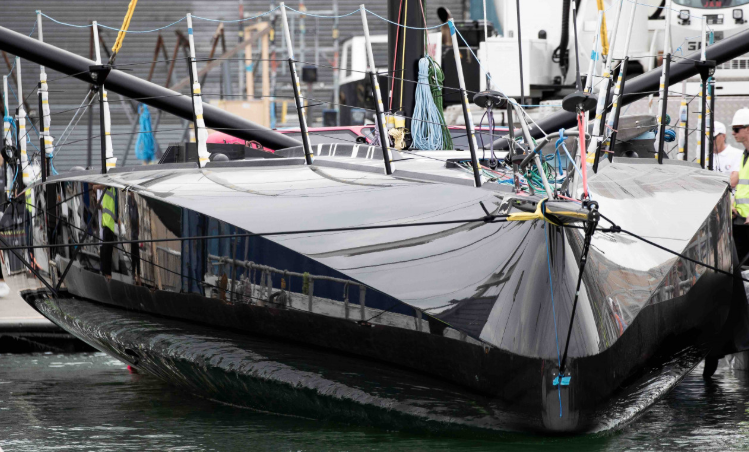 OMG, we just heard from designer and long-time friend Bruce Marek who said this: That Imoca 60 bow looks like a Ron Holland Transom!

There has been a lot of gloom on sailing websites over the last few months (except one that constantly tell it’s minuscule readership that everything is awesome! But as a perpetual ass-kissing, ‘yes man’ tool, this comes as no surprise .- ed.)

Covid-19 has really wrecked havoc on the sailing community with just about all regattas postponed a year and really not much racing of any kind going on. Well here is something positive, especially if you like flying boats. As a lead-up to the next Vendée Globe which is still scheduled to take place later this year, there is a brand new event for IMOCA 60’s.

The Vendée-Arctique-Les Sables d’Olonne is a really exciting race that takes the fleet from a start off Les Sables d’Olonne on the west coast of France to a turning mark (way point) off Greenland, then to a turning mark off the Azores and then back to France. It’s a distance of around 3,600 miles and will most definitely offer some serious challenges. The waypoint off Greenland is well within the Arctic Circle and even though it will be mid summer, it will be very cold with some ice likely.

In order to minimize any Covid-19 spread there will not be any kind of race village set up. The boats will not even be in Les Sables d’Olonne leading up to the start. Instead they will be back at their home bases and will time their departures so that they arrive at the start line off Les Sables d’Olonne in plenty of time before the start. Same at the end of the race. They will cross the finish line and head back to their respective home ports. In some ways this is probably the first ever real/virtual race as race fans will only be able to track their favorite skippers online and not see the sailors or boats “in the flesh.”

While it is totally understandable that the race is being run this way, it’s a shame because this latest generation of IMOCA 60’s are complete and total rocket ships. Every four years when I go to the start of the Vendee Globe I am amazed at the boats and think that they can’t possibly get any more exciting, and four years later when I go back and look at the earlier generation they always look so old and out dated by comparison. This is a real testament to the progress and innovation found in the IMOCA class.

One of the most obvious changes has been in the shape and size of the foils. These new generation boats will quite literally be flying above the water when the conditions are right. Another obvious change will be in the amount of protection there is provided for the sailors.

One of the favorites, the newly launched Apivia which will be skippered by two time French Offshore Racing Champion Charlie Dalin, chose a cockpit that is almost entirely closed. Alex Thompson, who unfortunately withdrew from this race, will operate his boat entirely from below. It makes so much sense. The amount of water that cascades down the deck of an IMOCA 60 is dangerous and would be exhausting if the skipper was exposed to it for too long. Instead they can operate everything from the safety of a covered cockpit.

Among the 22 skippers signed up there are some well known IMOCA veterans as well as some new faces. There are also a number of females entered which is typical of these big French offshore races. It’s all about the ability of the person no matter the sex and the French celebrate diversity with some of the big companies feeling equally pleased to be backing a female skipper as a male. Results on the water is one thing; the ability to connect with the French population and be a good ambassador for the sponsor is another equally important aspect of sponsorship.

While the Vendée Globe is principally a downwind race the Vendée-Arctique-Les Sables d’Olonne will offer all kinds of conditions including heavy upwind work, some light air sailing and some hard and fast downwind sailing. It will be a real test of the boats ahead of the November 8 start of the ninth edition of the Vendée Globe. It will also be fun for us house bound sailing fans to follow. The race starts on July 4. – Brian Hancock.

Sailor of the Month