asshole trump will kill this 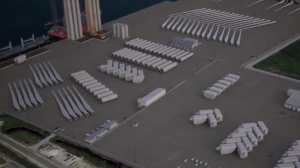 On Tuesday, New Jersey Governor Phil Murphy announced a plan for a new seaport specifically for offshore wind in Salem County, South Jersey. The facility – part of the state’s bid to capture market share in the nascent U.S. offshore wind industry – would be the first of its kind in America and would provide a site for turbine staging, assembly, and manufacturing.

According to the governor’s office, the New Jersey Wind Port could create up to 1,500 manufacturing and operations jobs, along with hundreds of construction jobs in New Jersey. It is expected to support up to $500 million of new economic activity within the state and the region each year. Read on.

a wing and a prayer