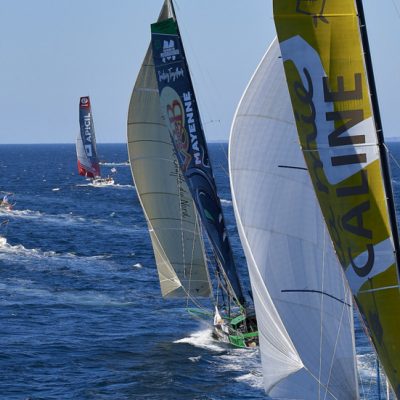 Everything you need to know about the upcoming  Vendée Vendée – Arctique – Les Sables d’Olonne race.

If you’ve been following the front page of this website, or virtually any social media recently, you undoubtedly would have seen that both new and recently re-fit IMOCAs have been popping out of the shed and up onto their foils at a rapid clip.

With winter refits completed – much of it during quarantine – and their 2020 season of testing and racing condensed to just a few months, the final push to the Vendée Globe has begun. Now just 150 days from the recently confirmed start date of 8 November, the ninth edition of the Vendée Globe is nearly upon us and the stage has been set for one single triangle-shaped ocean course which will serve as our best – and only – real preview of what is to come.

With the race starting on 4 July, a fleet of 22 IMOCAs will embark on overnight deliveries from their ports of registry and rock up to Les Sables d’Olonne just before the starting gun to begin what is set to the be the first socially-distanced ocean race of the COVID 19 era. The inaugural Vendée-Arctique-Les Sables d’Olonne is a 3,600 nautical mile ocean race which will begin just off of Les Sables d’Olonne before taking skippers up to the Arctic Circle – above 60° North  – before coming back down south to a mark near the Azores and then heading back for port in Les Sables d’Olonne.

For five skippers, the race will serve as their solo qualifying run for the Vendée Globe, while for others it will serve as a final speed test before the main event in November. Still for others, it is a mere sea trial of working the kinks out of a new boat or training up a rookie skipper. While not necessarily representative of a mostly-downwind race around the world, this unique course should throw a wide variety of weather conditions at the fleet, including a lot of transition zones and light air creating many opportunities to win it or lose it on weather routing.

With a starting line up just announced with 22 skippers on the line, the race will feature most of the heavy hitters and pre-Vendée Globe favorites of the IMOCA class, much of the B-fleet and a few of the rookies. With a record-breaking 37 skippers applying to sail in the next Vendée Globe however, many names, both big and small, are absent.

One of the most notable skippers absent is Alex Thomson and his new Hugo Boss, which recently left the shed and hit the water after an unfortunate keel failure in it’s first race. Wanting to maximize time on the water while minimizing risk to his boat, Alex has chosen to sit this one out. Even though he’s in for his fifth Vendée Globe participation, the veteran skipper will still need to sail a 2,000 mile solo qualifying passage with his new boat to officially register. Another conspicuous absence amongst the perceived front runners is Nicolas Troussel and his new Juan K designed foiler Corum L’Epargne, who also needs to complete a qualifying sail.

Amongst the boats that are present however, most of the ‘A’ fleet is expected to be on the line. Arguably the fastest boat outright looks to be Jeremie Beyou and Charal, the first boat launched of this new generation and still conceivably the most radical. Since having some teething issues after launch and then getting fucked by the long dick of the doldrums while pulling a horizon job in the Transat Jacques Vabre, the 3-time Figaro champion is hungry for a win with Charal and it’s new 2nd generation foils continuing to show a ton of potential.

Charlie Dalin and his newly launched APIVIA won last year’s Transat Jacques Vabre, and with parent company MACIF as well as Francois Gabart and his company MerConcept as technical partners, APIVIA should be tough to beat in both this race and the Vendée Globe. Sebastian Simon and Arkea Paprec have shown flashes of brilliance since launching the first Juan K designed IMOCA in nearly a decade and stomping to a win in his first solo IMOCA race.

A long time favorite of this writer is the incredibly talented Thomas Ruyant, who seems primed for success in his new-generation Guillame Verdier designed LinkedOut. Former Mini Transat winner and Class 40 and Multi 50 stud Armel Tripon could play the spoiler in a big way as his new Scow bow-esque Sam Manuard design L’Occitane is looking quite refined and seems to be skimming the surface to some very big numbers in early testing.

Easily the top of the heap among the non-foiling boats, Banque Populaire X, skippered by Mini Transat sensation Clarisse Cremer could prove to be a dark horse in this race, and should excel in the transition zones between weather systems and the accompanied light spots and upwind sailing conditions that are likely to be present on this unique Vendée – Arctique – Les Sables d’Olonne course.

With the sailing world just beginning to emerge from it’s pandemic-induced hibernation, we’re chomping at the bit to see these nearly two dozen IMOCAs in action, as the class continues to develop into what is now clearly the best show on the water. – Ronnie Simpson.