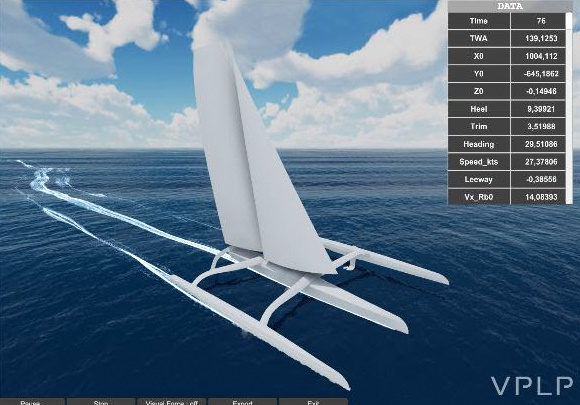 VPLP GETS ITS OWN SIMULATOR

In the ultra-competitive world of naval architecture for racing boats, the simulator is fast becoming an essential if not strategic tool. “Dynamic simulation for calculating stresses is playing an ever-increasing role in design. Simulators are now par for the course, and without one, you can’t really work on offshore racing projects,” says Xavier Guisnel of VPLP’s engineering department. “Even velocity prediction programs are now of secondary importance compared to a simulator.”

The market is currently dominated by Gomboc, a simulator developed by Swiss engineer and member of Emirates Team New Zealand, Jean-Claude Monnin. VPLP has acquired a licence and also uses the software developed by Artemis Racing. “The problem with tools like these is they are always locked when you rent them,” says Vincent Lauriot-Prevost. “It’s a risk for a business like ours to be dependent on a single supplier,” adds Xavier Guisnel.

Which is why VPLP has over the last three years been investing in its own simulator. The aim is, in the words of Vincent Lauriot-Prévost, “to have control over the development of a tool which is equal to our ambitions.” This development role has been entrusted to Paul Kerdraon who joined the firm with the express intention of working on the project. Graduate of the École Polytechnique, he will be defending a thesis on the subject as part of a government-sponsored programme in partnership with the École Centrale Nantes. “Existing simulators are designed primarily for the America’s Cup, which takes place on a smooth sea. We need to take into account the effect of the swell in the stress analysis so we can model the vessel’s sea-keeping properties.”

This sophisticated tool, whose models were validated by a month’s worth of tank tests, will be used not only for designing, but also for fine-tuning the boats before they go in the water, which saves considerable time upstream. “The idea is to deliver a digital boat at the same time as the real one,” says Paul Kerdraon. “The simulator allows us to take risks in virtual reality, to go much further in our search for a compromise between stability and performance, which is key. It opens up important avenues in the field of optimization. Racing teams are getting more and more involved in the design of their boats, and for them it’s a decisive issue.” Another selling point is its capacity to generate data which would have otherwise had to have come from experience at sea and feedback from the crews…