it is rocket science 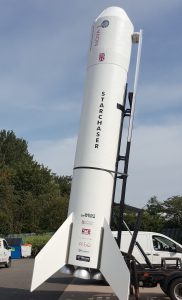 A NOVA 2 rocket being developed by Starchaser is within ten months of its first launch.  This one-seater rocket is a significant step towards future plans which include a rocket capable of taking two passengers with the pilot.

This uniquely British project is being built in Hyde, Cheshire with WEST SYSTEM epoxy and glass fibre as the main components for the capsule.

NOVA 2 is one of a series of rockets being developed by Starchaser. The design for the volunteer-built rocket has been thoroughly examined by the European Space Agency following the award of an ESA Study Contract.

“Upon completion of the contract they gave our plans a hearty thumbs-up,” says Steve Bennett (Starchaser MD). “Everything NASA does is in the public domain, so if we want to see how they solved a particular engineering problem, it’s easy to look up. We’ve got two dozen part time volunteers working on the build as a labour of love, they’re a fantastic team.”

A NOVA 2 test flight is planned with a crash test dummy, for the early part of 2021 from a site in northern England (Covid-19 permitting). Manned flights will ultimately take place from a purpose-built Spaceport in New Mexico.

“I’ve always been interested in space and building rockets,” says Steve who gave up his day job 22 years ago to start the company. “Over the years the designs have got bigger and better and more sophisticated.”