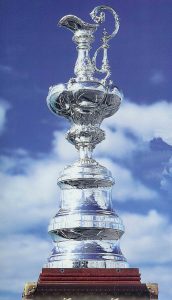 Steady growth built the membership of SBYC towards 200 and the word was clearly out that there was a new game in town and not just in China. Early in 2005 I received an email from a fledgling syndicate in the USA backed by a Shanghai businessman emigre suggesting the idea for a Sino/US Challenge through SBYC.

Well at first I though it might even be a wind up but soon it became clear it was anything but. However did SBYC qualify? Were we recognised? Meetings with the Chinese Yachting Association (CYA) provided us with that recognition. Di d we run a regatta on the arm of the sea?

Well we quickly put together a Notice of Race for such then an impromptu meeting with the Maritime Safety Agency MSA where sailed led us to learn that the outflow from the lake was only 8 in 12 hours, the other 4 hours being inflow – it was tidal AND seagoing vessels crossed it. Was this good enough? Communication with Americas Cup Management (ACM) confirmed that this did satisfy the ‘arm of the sea’ element of the Deed of Gift. Documents and proofs were submitted and SBYC as the club and One Ocean as the syndicate were accepted by ACM on Alinghi’s behalf as China’s first challenge for the America’s Cup.

As the months went by it was clear to One Ocean and SBYC that although the ‘seed money’ for the entrance fee and performance bond were available we were less than confident that we could raise the required sponsorship to do the level of justice that the Club, the Syndicate and most of all The Cup itself deserved so with a heavy heart we withdrew our challenge at 1545 Swiss time, just 15 minutes before the deadline for final entry confirmation.

As a result ACM then accepted a challenge from Qingdao International Yacht Club which had been formed just 5 days before their challenge, had no members, no boats and never run a race, let alone a full regatta. Their subsequent performance in AC32 proved to us that we made the right decision in withdrawing with honour. I fact the later New York Supreme Court ruling over CNEV which was actually more DoG compliant than QIYC perhaps demonstrated ACM was to have a Chinese entry.

It was quite an experience and introduced me to some of the movers and shakers of the higher end of our sport.

This wasn’t the only match racing that we potentially got involved with. Sixteen years ago Ironrock Sailing Club challenged Zhuhai Sailing Club in 2 beat up J24s. My wife has been involved in every edition while I joined in in the second. The event has grown over the years and over the past few years has been sailed in J-80s and has for the past two years been the largest one design keelboat regatta in Asia with around 40 teams entered. It comes in two parts, a 4 day fleet event with the top 12 teams invited back 1 month later for a full round robin and then knockout for the right to challenge the previous year’s winner.

A few years ago, as standards increased, we started to invite top umpires to make sure everything was run right and for 5 or 6 years we have had a couple of umpires with 5 America’s Cups between them. This has led to the event being regarded as the event to do in China each year. As it isn’t until October we are hopeful that travel restrictions will be eased in time avoiding a postponement or cancellation.

In the next installment, we go to the VOR…

get into hot water