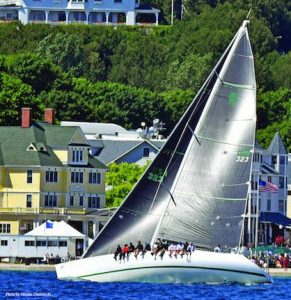 Members of Bayview Yacht Club and other Great Lakes clubs have been racing from Port Huron to Mackinac Island since 1925. The Bayview Mackinac Race is an institution in the region, ranking as a pilgrimage for racing sailors, many of whom are proud members of the Old Goats Society, a distinction reserved for sailors who have completed the race 25 times or more.

At first the racecourse was almost always a straight shot, 235 statute miles up the eastern Michigan shoreline, but in the ‘70s, a 290-mile, two-legged course was introduced, sending the fleet across the lake to the Canadian shore before turning northwest towards Mackinac Island. There were variations on the two themes over the years, but in the early ‘90s, Bayview decided to use both courses, with the smaller, slower boats generally assigned to the Shore Course. Read on.