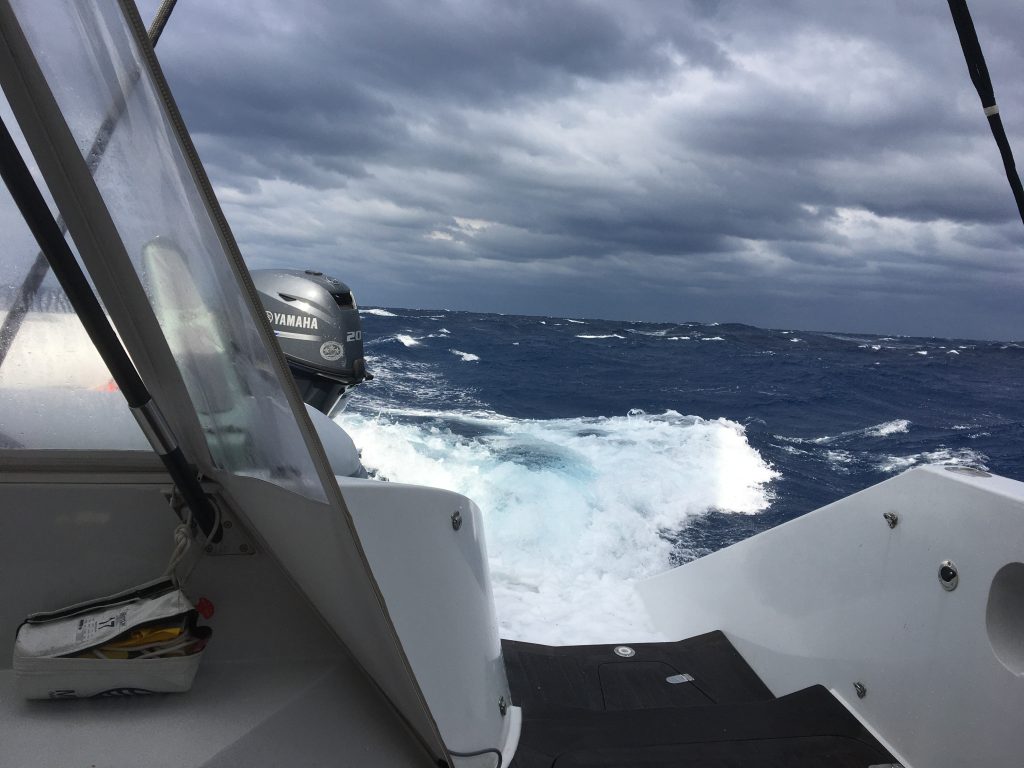 My buddy sends an email to my son and me asking “Who’s in to sail THIRST from Ft. Lauderdale to Marblehead?”  I think we both answered “IN” within 10 seconds.  But what about Covid-19?  Are we putting ourselves, our families and potentially US Coast Guard personnel at risk?

Regardless of the size of the boat, there is no way to socially distance on board.  We knew this in advance.  You can’t possibly wash your hands, or clean the wheel, the companion ways, winch handles and the Nav instruments enough. As a crew we were all aware of the risks.  We had all been working from home for weeks, so our collective exposure potential was quite low.

I calculated that I’d be at more risk staying at home and going to the grocery store than we would at sea.  And for the Coast Guard? The owner/captain is meticulous about maintenance and weather, so the chances of a mishap in May were also extremely low.  But still not non-existent. Probably about the same as staying home, driving to the grocery and working on my own boat.

After a fully-masked and super easy $33 flight from Boston to Ft. Lauderdale, we did a pre-launch prep of the boat for offshore: safety gear checks, full underwater inspection, deck and hardware checks, loading provisions.  Here’s the thing about boats like THIRST with lots of miles under smart owners & captains: Everything works. The safety equipment is top shelf. Most of the crew have lots of miles. And everybody is ready to learn new methods and tricks. Example: The Mustang Survival safety-harness/life jacket combos have MOB recovery AIS and strobes built in, and the jacklines are permanently installed.

We spent the night aboard while hanging in the slings (no hotel due to the pandemic risk) while the bottom paint under the jack stands dried.  And then into the water by 8 AM.  Off the fuel dock by 9.  With 4 Jerry Jugs of fuel on deck, THIRST can motor for just under 900 miles.  We know this precisely as we once limped into Bermuda with a only enough fuel to power one engine after motoring the entire way from Antigua (900 miles).  Rhumb line to Marblehead through the Cape Cod Canal is 1,110 miles.  Got to sail. 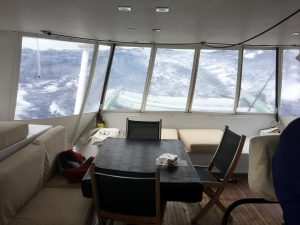 Once out of the Ft Lauderdale cut, we immediately began two days of beating into with the Gulfstream: Warm water, short sharp waves, 2.5 knots of favorable current fighting 20 knots of breeze on the nose, yet we were comfortable and dry aboard THIRST.  We had to short & long tack up the beach until we cleared Palm Beach and the infamous Mara Lago (Question: Does the smallest dick have the biggest flagpole?  Answer: Yes.) We were 50 miles into 750 miles on Starboard tack and headed off shore in the Stream.

Our routing by Commander’s Weather and Bill Biewenga (Google him) was spot on, optimizing favorable current and wind while minimizing the time at sea.  Always a good idea to get two opinions Prior to the trip we monitor www.Windy.com and NOAA & Rutgers websites for the Gulfstream to get a solid grasp on the weather patterns and to decide if we should delay departure.

While at sea, we communicate with shore via Garmin In-Reach, 160 characters at a time.  Each morning we send weather reports to Commanders and Bill Biewenga including Time & Date, Position, COG, SOG, TWS, TWD, Sea State, Barometer, Cloud cover (measure in 1/8s), and other tidbits as appropriate.  Bill sends back his recommendations after downloading all kinds of weather on his computer.  Before departure the Owner received a five-day forecast and routing from Commander’s plus he instructed them to contact us by Garmin In-Reach if anything weather related were to change.

This Marblehead based crew consisted of four good friends: the owner, his one-design crew, my son and me.  Three of us have over 40,000 Gunboat miles between us.  Three of us are 60 or over.  We all know the boat well and we don’t push it.  None of us are paid to do this delivery.  As the professional on board, my son reminds us of the professional delivery mantra “Slow is Pro”.

Nobody gets hurt, we don’t break anything big, we learn something new, we eat well, we have lots of fun, and there is a delivery to complete.  Same for racing.  But we aren’t racing THIRST right now.  We are doing an ocean delivery during a pandemic.

We locked into great weather pattern and the first four days of 250+ miles in the Gulfstream.  For days 3 & 4, we were downwind in 20 to 30 knots and seas of up to 15 feet.  The Gulfstream is a conveyor belt carrying everything in it’s path up the coast. But it is not a free ride.  The waves are confused and can be nagry.  Squalls are common. 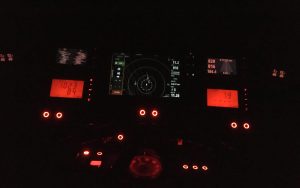 Great surfing definitely happens, but from unpredictable wave patterns where waves from multiple directions peak without warning.  Some break on your bow, your stern or midsection.  On THIRST, we  throttle the boat back to run at about 10 knots, and accept with pleasure those faster bursts when they happen. Getting “pooped” (waves breaking into the cockpit) can be a regular occurrence and we experience two waves washing into the raise salon.

Like life, sailboats are about compromise. Most catamarans handle better when going faster. They don’t wallow.  Heavy cats are slow, and as the wind builds, slow boats experience higher loadings.  Faster, more easily driven boats, use less power and surf a lot sooner.

My conversations with Nigel Irens, designer of both the Gunboat 60 and 55 revealed that these boats were intended to be very fast, very stable cruisers.  Some builders added undo weight. But human nature took over and owners have been making them lighter and even faster, replacing centerboards with dagger boards (including C-shared board) increasing mast & sail packages, extending the sterns and taking out the creature comforts.

Super-light, over-powered cats need more crew than just a married couple as called for in the 55 design specification.  And that’s where the 55 fits in. THIRST is a great cruising boat for one or two couples, and is really fun to race with a crew of 7 to 9 (Antigua, St Barth’s, Newport & Marblehead).  The compromise is that, when compared to the tricked out 60’s, it is a bit slower in very light air.  It is very easily steered in all conditions by the auto pilot.  It takes a big monohull to be as comfortable as 50’ very light catamaran.

As our ride in the Gulfstream changed from a beat to a run the conditions became favorable for flying the A2 kite for a few hours.  Once True Wind Speed (TWS) built to over 18 we doused the kite in it’s sock. As TWS grew into the 20, Speed Over Ground (SOG) ranged from 10 to 18 with some surfing into the 20s (max speed 23.5 knots).  Remember that the Gulfstream is not your average patch of water.  Given the sea state and the True Wind Direction (TWD) constantly oscillating 15 to 30 degrees every 5 to 10 minutes with 6 to 10 knot TWS changes, we were content to under power the boat and let the autopilot do its thing based upon Apparent Wind Angle (AWA).

Anarchist “mookiesurfs” questioned us via Garmin In-Reach asking if THIRST is able to push the apparent wind far enough forward to take advantage of the 20 to 30 knot breezes for 2 days if running conditions.  The answer is absolutely YES when racing mode with a full crew, but not in Delivery mode.  When condition are just right in the high range of TWS, THIRST would very quietly accelerate from 10 to near twenty with a burst of acceleration.  These cruising boats are fast as we proved at THIRST’s first regatta at Antigua with an inexperienced crew, where were very evenly matched with the also brand new HH66.

After a really fast 4 hour rip in constant 30 knots of TWS, the final 17 hours were motoring for the last 120 miles through the canal and on to Marblehead at sunrise.  We were on the mooring at 5:30 AM Sunday for a total of 1170 miles over the bottom and 990 through the water.  After 116 hours we averaged exactly 10 Knots of COG thanks to 180 mile boost from the Gulfstream.  Here is our track www.share.garmin.com/thirst

Would we do it again in light of the pandemic? Hell yes.  Best combined mental therapy and social isolation I could ever ask for.   Four good friends sailing together and overnight ocean surfing with my son: absolutely the best Friday night in a long time. Thanks to owner Seamus Hourihan from including us, and for maintaining the boat in such Bristol condition.

Lucky for him, my son is headed to back Florida in two days to bring another Gunboat home to New England for the summer.  What a job!