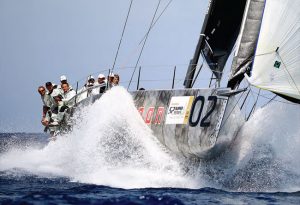 Once a software engineer always a software engineer. It was appropriate that Hasso Plattner and the home Phoenix team did so well at the first, and so far only, 52 Super Series event of the season, the Odzala Discovery Camps Super Series V & A Waterfront Cape Town Regatta… Local knowledge, smart, confident sailing and the benefit of a good couple of weeks of two-boat training and testing all played a role in Plattner’s well-deserved second overall.

The build-up to Cape Town also saw the next step forward for Njord Analytic’s newest suite of advanced performance analysis tools. The German-based company, led by Jonas Witt, grew from SAP co-founder Plattner’s own dissatisfaction for what he saw available when he and his daughter Tina started working up the two Phoenix TP52s in 2018. Read on.

Offshore Racing – an overview on the postponements