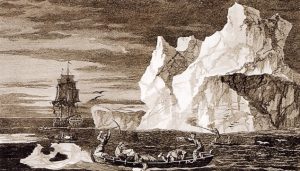 “At 4 o’Clock we discovered from the Mast head thirty eight Islands of Ice extending from the one Bow to the other, that is from the SE to the West, and soon after we discovered Field or Packed Ice in the same Direction and had so many loose pieces about the Ship that we were obliged to luff for one and bear up from another.

From the Mast head I could see nothing to the Southward but ice. I did not think it was consistent with the safety of the Sloops or any ways prudent for me to persevere in going farther South, even supposing this to have been practicable, which however is doubtful.” (Cook’s position in the Resolution that day was at 64º18’S. He eventually turned back at 71°10’S.)

Title inspiration thanks to Jesse Pinkman.

Bitchin’, But Is It Fast?