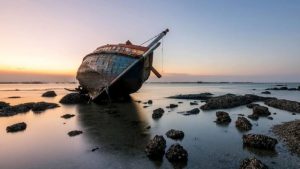 ‘Lee shore!’ shouted Tasker as he scrabbled aft. The storm grew to a pitch of violence that none of the men had known. The mainsail was first to go, splitting from head to foot with a sharp crack. For an instant, the wind streamed through the gap it had made. Then the sail dissolved into ribbons that streamed from the boltrope along its base before the wind tore them away leaving only the reefs and the sheets that had held the sail, cracking like insane whips until they were hauled tight.

Then the foresail blew. Now only the spanker, the two topsails, and the jib were left. Together they lent their weight on the helm one last time to bring the ship to windward. But she would not come around. They were singing when she grounded. There was a brief screech from her coppered hull before the rocks bit into her timbers.”

Jeremy Seal – The Caledonia driven ashore in 1842, from The Wreck at Sharpnose Point