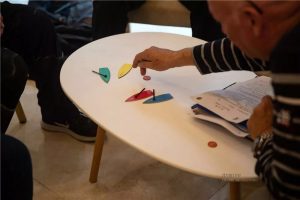 That might seem a damning heading but don’t get me wrong. Most umpires ARE god enough, it is just that it can be a very frustrating job at times.

Our sport prides itself on being self-policing. That may have been good enough in the ‘good old days’. When asked about the ‘wonders’ of sail boat racing I always used to say because it is played by the ‘right kind of people’ but increasingly this is perhaps not always the case.

Sure there have been the odd high profile cases over the years, the iPunkt incident is one that springs to mind. In fact I was a victim myself once (many, many years ago) when a competitor ran aground, motored off then about 100m  down the race track. It was only family cruisers and it mean my 10 yr old daughter & I didn’t get 1 more winner’s glass (really – so what?).

My good buddy didn’t get 1 more 2nd place trinket (same attitude – it had been fun) but the real victim was a young woman who was denied her first ever podium trophy. The story spread round the clubhouse and the prize giving announcement was met by a strange silence except for a comment from the back “Not bad for a F**king motorboat”. Small beer, it was water off a ducks back and I should have protested – today I would.

And that is part of the problem where there are mixed ability and mixed experience in a fleet. Sometimes the more experienced (and cynical) will knowingly push the rules betting that the less experienced sailor will let them in and not fly the flag and it usually works, certainly when there is no judge on the water and even when there is on the water judging the self policing concept of no flag, no foul lets these rules pushers get away with it.

I was on the water judge with a very experienced friend, during a regatta with money prizes, when twice we clocked a boat forcing their way inside at a mark when they had absolutely no rights under RRS 18 but the less experienced boat let them in and although they appeared unhappy neither shouted nor flew the flag.

Basically they were bullying which is an activity which is illegal in the workplace and not acceptable in everyday life. Our angst wasn’t so much that we couldn’t fly the flag but that the actions of the boat in question were clearly bullying and not fair sailing. Then in the penultimate race in the starting sequence they were clearly going to be OCS but bore down on the leeward boat and there was (gentle) contact and off up the beat they went.

We gradually trickled through the fleet (very light weather) until we were about a boat length from the offending boat then through a translator asked them if they knew they broke a rule n the start line to which they answered “Yes” (not as smart as they thought they were).

Our response was that if they didn’t do a penalty then we would protest them under RRS 2 and we all know where that could lead. Clearly not happy they rolled into their penalty which given the light winds was expensive but justice was done. Perhaps not as per the judges or umpires manual but clearly illustrates the problems with our sport being self policing if people wish to try and take (unfair) advantage of the situation.

To answer the question in the title, and considering the umpire or the judge is in the equation to ensure, as far as possible, fair sailing, then on that occasion the umpire WAS good enough. In fact that same team, with weaker officials in a different regatta walked away with a prize they had absolutely no entitlement to – but that’s a story for a different occasion.

What do you think? Jump in the thread.

black is the new black