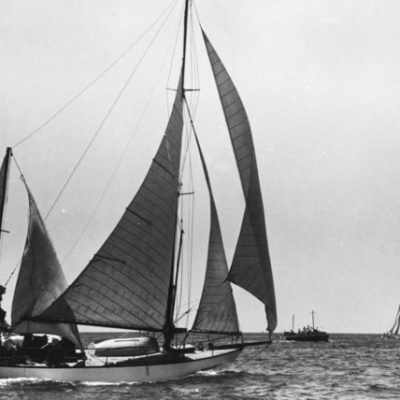 “SYDNEY, Friday:– This afternoon the first ‘casualty’ of the Sydney Hobart yachting race was reported. It was the Archina, a 52ft. Bermudian ketch, owned by Mr. P. Goldstein, which was observed to be in distress off Montague Island. A ship which rushed to the scene later reported that the crew was safe and would try to continue in the race.

At 4.45 p.m. the Archina was seen anchored 20 miles from Montague Island. Late this afternoon the yachts again struck bad weather south of Twofold Bay, with a southerly gale blowing in gusty squalls at never less than 23 miles an hour, and at times reaching a velocity of 50 miles an hour. Last reports received tonight revealed that the 52ft. ketch, Winston Churchill, was still in front off Red Point. Next in line was the Kathleen.”

(Archina was the only retirement in the first Sydney-Hobart race. The winner, Rani, had an elapsed time of 6 days and 14 hours.) – Sydney-Hobart newspaper report – The Sun (December 29, 1945)