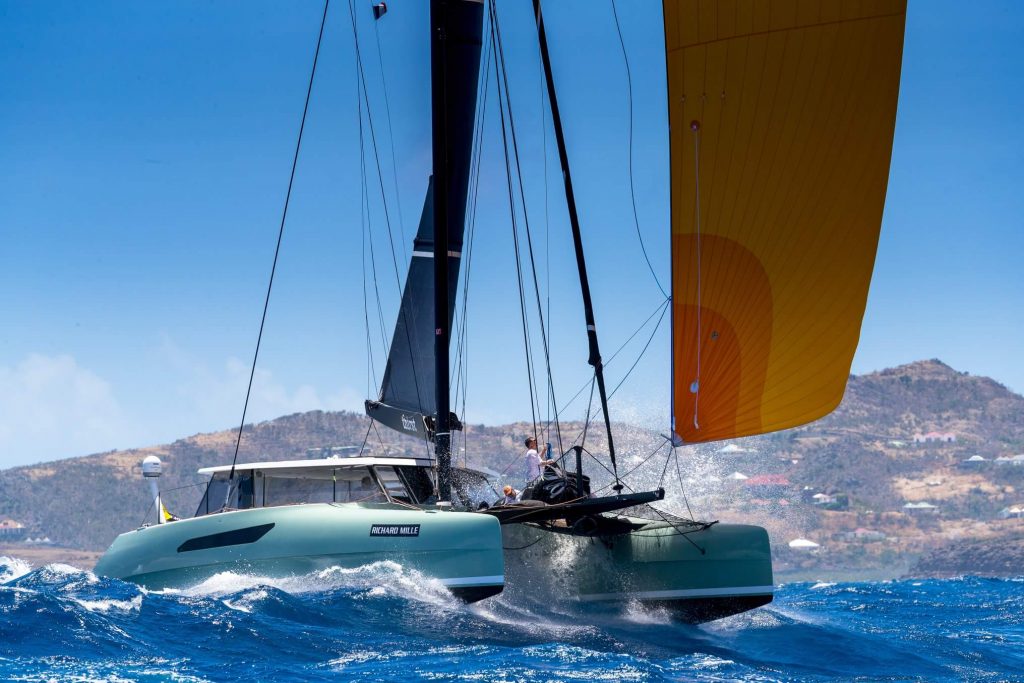 How does one prepare to go offshore in times of Pandemic?

The answer appears to be to keep your social distance in advance of the trip to prevent anyone aboard.  We will fly from Boston to Fort Lauderdale.  Isolation, physical distancing and mask prior to the trip is the key. Once we are at sea,

On Tuesday I will join the owner/captain and 2 others (one being my son) on the delivery of the Gunboat 55 THIRST from Fort Lauderdale to our home-port Marblehead, a trip of 1110 nautical miles on the rhumb line and passing through the Cape Cod Canal.     If we optimize the Gulf Stream we might add another 80 to 125 miles as we would slide to the east off of the DelMar peninsula.  The route will be determined by the weather next week.

The winds (as reported by www.WINDY.comthis morning) look reasonable, and perhaps a single tack for the 1000 miles From Ft Lauderdale to   with some variation between the Euro and US models.  The key will be to avoid beating the last 250 miles to the canal.  Currently THIRST is scheduled to splash Tuesday Morning, and after a quick stop at the fuel dock, we’ll head into the Gulf Stream which is only a mile or so off shore.

The 55s are a relatively heavy Gunboat which makes them slower than their bigger brethren in light air, but possibly more sea-kindly offshore.  The boats are actually 57 feet long after the original molds were extended to give some additional buoyancy aft.  We’ll carry a 150 gallons of diesel, which is good for about 900 miles.  We once we had to motor from most of the way from Antigua to Bermuda, and we are hoping for good breezes this trip.

THIRST will carry 5 sails: a Mainsail w/ triple reef, self-tacking Solent on hanks, J1 on furler, Code 0 on furler and an A2 in a snuffer.  For a delivery, once the breeze is over 12 knots, the boat like a reef in the main.  Our usual nighttime set up if there are squalls in the area is One Reef and Solent or J1 while monitoring AIS, ship radar and weather radar.

The key to handling squalls is to know when they are going to hit, and to prepare by centering the Main and Solent before heading dead down wind.  As the breeze increases from 12 to 30+ knots in the squall, the boatspeed climbs from 10+ to 20+ almost instantly.  It takes some getting use to be dry and alone on watch in a squall while the hull are making little noise compared to the rain on the roof and deck. Folks sleeping never wake up.

Interestingly, the boat has only two winches.  The hydraulics run the main sheet, two winches, two centerboards and the anchor windless.  Every maneuver must be planned in advance.

We know that we are putting to sea in times of a pandemic.  Our interaction will be limited to 4 people. In reality, we will interact with far fewer people during our voyage than we might have had we stayed ashore.  We have a very seasoned & healthy crew with no pre-existing conditions.

THIRST is an exceptionally well prepared boat which can outrun most weather.  Three of us have over 6000 miles on the boat.  We are heading into the Atlantic during one of the mildest months for weather in terms of storm and squalls. Are we concerned about the potential of getting symptoms of Corona Virus at sea? Of course.  Do we have contingency plans?  Of Course.

You can follow us via the THIRST Tracker https://share.garmin.com/thirst  You can send messages to the boat (120 character limit.  Sometime delayed by a few hours.) and we’ll try to answer the good questions.  Make sure to identify yourself as we may not know from whom the message is from. To be continued.