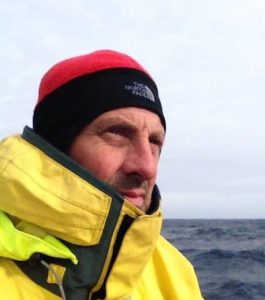 With the ‘rona still raging, virtually all of us are suffering from some type of sailing withdrawals. Be it in the literal sense of going sailing, or in the virtual sense of chronically following the tracker of a major ocean race or record attempt, life is not normal right now and we all miss sailing.

While we should be following a bunch of doublehanded duos on Figaro 3’s racing across the Atlantic right now in the Transat AG2R, followed in another 10 days by 30 solo Class 40s, IMOCAs and Ultime trimarans in the Transat CIC, we are instead left with precious little sailing to follow.

Fortunately, we can live vicariously and get our voyeuristic fix through Canadian Bert ter Hart who is attempting to become the first North American to complete a solo, non-stop circumnavigation using old school, non-electronic means of navigation.

Having set out from his home in British Columbia back in late October, ter Hart began his solo non-stop lap via the Southern Oceana and the Great Capes in an age when the Corona virus was merely something to be weary of catching in a Mexican pub. Certainly not setting any speed records along the way, ter Hart describes being becalmed about as long as many of us have now been sheltering in place. “The weather I have encountered in the South Atlantic and the Indian oceans has been very unusual,” ter Hart said in his email. “It seems to be more extreme.

For example, I have been becalmed almost 40 days in the six and a half months I have been gone. That is very, very rare. That translates to almost 5,000 nautical miles, and had I not been without wind so often I would be home by now”, ter Hart told the Weather Channel, before adding, “The weather that I have experienced is vastly different than what is on the pilot chart. You could say then that my experience with the weather has been vastly different than the climatological mean.”

Obviously, adding 40 days to a solo non-stop circumnavigation in a slow, tubby boat is going to test one’s resolve, but even more immediately important, it’s going to thoroughly exhaust Bert’s food supplies onboard. While his food situation onboard may be dire, his resolve seems to be holding up admirably well.

Just a few days ago, his burly 45 footer Seaburban rounded the last of 5 capes, New Zealand’s South Cape in testing conditions, the Southern Ocean proving to be a challenge until the very end. “It’s blowing a gale and gusting more with miserable seas coming from three different directions. In other words, perfect Southern Ocean sailing conditions”, ter Hart wrote in his blog. “It feels different. Before, there were strings pulling me to this place and the four others. Now the only strings I feel are all pulling me home… Until just a few moments ago, I wasn’t going anywhere near. And after coming all this way, the Pacific seems a puddle.”

This mere Pacific ‘puddle’ between the Southern tip of New Zealand and British Columbia is already proving taxing however. Just a day after rounding his final cape, April 29, ter Hart has begun to contemplate his first stop since leaving British Columbia more than half a year earlier. Just beginning his turn to the northeast and towards home, Seaburban’s wire-to-rope jib halyard failed leaving his furling jib to come sliding down it’s aluminum foil and overboard into the drink.

Breaking his own well-established rules, he jumped up on deck with no safety gear in his ‘down below’ clothes to get the sail back on board, folded and stored below before contemplating his next move. It looks like that move may be to sail 600 miles northeast to New Zealand’s Chatham Islands to go aloft and fish down a new halyard that will allow Bert to finish his voyage. For now however, he’s left bobbing at .3 of a knot of boat speed in a ridge of high-pressure between two Southern Ocean lows. A ton of swell from different directions, no breeze, and no jib halyard… sounds fun.

Coincidentally, one of the pioneers of Canadians sailing solo around the world, Yves Gelinas – the creator of the Cape Horn wind vane – also made his only stop for repairs in the Chatham Islands nearly forty years ago. After losing the rig of his Alberg 30 Jean du Sud in nearly the same spot that ter Hart lost his jib halyard, Gelinas harnessed his inner Frenchman to achieve his goal.

The Quebecois sailor sailed under jury rig to the Chathams and spliced his two broken mast pieces back together and re-stepped the rig before sailing more than 10,000 miles back home to Quebec. Let’s hope that Bert ter Hart can achieve similar success; the smart money would be on him to get it done. Will this be the first round-the-world sailing record of the COVID 19 era? Follow along on Bert’s excellent blog and website to find out!

As an aside, if you want to kill some COVID time by watching one of the greatest solo sailing films ever made, you can watch Yves Gelinas’ self-made film Jean du Sud for $6 on Vimeo.  Apart from the scene of him kneading bread dough with a boner in a Speedo, it’s a truly great flick and exposes the true nature of solo sailing in a small boat.