been there, wrote that 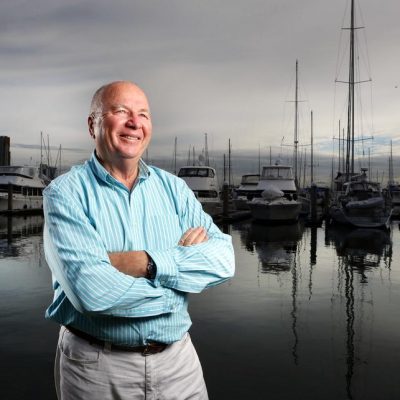 During these down times of the Coronavirus, where most boats remain moored and public waterways closed, many of us find ourselves with an abundance of time on our hands. One of my favorites ways to pass idle time, usually when on delivery or on passage, is to pick up a good book. I don’t do fiction, I like to read real stories about things that actually happened, preferably involving a sailboat of some nature.

Throughout the years as my own sailing writing career has taken off, i’ve become quite a fan of Rob Mundle. One of the nicest guys you’ll ever cross paths with, Rob has become one of sailing’s greatest story tellers. Working with the likes of Hamilton Island Race Week, Wild Oats sailing and many mainstream outlets, Mundle is also one of sailing’s great authors with an incredible 18 books under his belt.

During these COVID days when we can all use a bit of reading material and inspiration, I thought it would be fun to reach out to my old friend and writing idol from down under and pick his brain about some of my favorite personal sailing books, and share them with all of the anarchists at home.

Ronnie Simpson: Bula Rob, last time I saw you – four months and two life times ago – we were down in Hobart and you had just released your latest book, which is about 75 years of Sydney to Hobart history. I haven’t had a chance to read it yet, but am definitely looking forward! Tell us a bit about the book, how it came about, and how it’s been received thus far.

Rob Mundle: The Sydney Hobart race has, arguably, the most colorful history of any of the world’s great races and, for that matter, any of the world’s major international sporting events. Each year it presents an amazing blend of drama, excitement, skill, determination, daring, intestinal fortitude and ability to party before and after the event. Almost a year before the 75th anniversary race I realized that no one was planning to tell the real story of what had made the Hobart race tick over all those years.

Having reported on the race for more than 50 years for television, newspapers and magazines – and competed twice –  I decided to pick up the ball and run with it. I went to my publisher, HarperCollins, with the idea which we then took to the Cruising Yacht Club of Australia. The Commodore Paul Billingham and the CYCA’s board liked what they heard so a deal was struck. Consequently I would write the official 75-year history of the great race.

RS: So your most recent book is about 75 years of racing down to Hobart. But the first book of yours that I ever read, when I first became truly aware of who you were as a writer, was Fatal Storm, about the legendary 1998 race. Tell us a bit about the ’98 race and what made that event so well known, and that book so well received.

RM:  In so many ways the 1998 Hobart race was a turning point for the sport worldwide. The tragedy that came with that heinous storm was a wake-up call – the sport was obviously  heading in the wrong direction in so many ways – yacht design, construction, communication, search and rescue, weather forecasting… the list goes on. I wrote Fatal Storm on the wave of adrenaline – my newspaper reporter days came to the fore as I had a crushing deadline to meet. The book had to be the first to hit the streets worldwide and it had to be the best. There was a massive number of interviews to be done, reports to be gathered etc. etc. I went head down/bum up for four month until bingo – there it was in its first draft, all 110,000 words! I say with some level of pride, Fatal Storm has sold in excess of 300,000 copies, is in six languages and is considered to be a bible for people wanting to put to sea on a yacht for racing or cruising. Apart from telling the story of the ’98 race it tells how quickly things can go wrong and catch people unawares or unprepared.

RS: What do the next 25 years look like for the Hobart race? With COVID 19 and a deep recession likely on the way, plus all of the other more foreseen variables, how does the next quarter century look? Do you think we’ll ever see a multihull start in the race?

RM: if you include COVID 19 in that question then the future is unknown as is the case for just about everything else in the world right now because we still don’t really know what we’re dealing with. However, take that out of the equation and the future of the race should continue to be strong, exciting and colorful. One of the biggest contributing factors to the success of the race is the interest shown by the general public. They see the Hobart race as a sporting icon that must be followed religiously every year during a period between Christmas and New Year. Multihulls remain very much a “no-no” for the race right now and I say (as a monohull and multihull enthusiast) this is unfortunate. Mind you, it is possibly the severity of the 1998 storm, tied to ingrained concerns among race officials regarding the seaworthiness of multihulls, that is blocking the way for multis.

RS: What about in the more immediate future? I haven’t seen any official announcements regarding Hamilton Island Race Week or the Sydney to Hobart, but with the global situation continuing to unfold, those events have to be impacted, if not cancelled. In your opinion, what do those two events end up looking like in 2020?

RM: Right now the entire world is swimming upstream when it comes to COVID 19, but no one seems to know where they’re headed. We are in a holding pattern for everyday life as we know it.

RS: Changing topics… as I currently live and sail in Fiji, I find it fascinating that a lot of the nice pretty charts on my chart plotter are actually based on Captain Bligh’s charts from so many years ago. With such an intricate system of islands and reefs and a relatively small tax base, the place has literally never been charted properly since he did it himself; truly a remarkable feat. Your book, Bligh, was one of my all time favorites that I have ever read. What’s the most common misconception about Captain Bligh?

RM: Let’s start with the last bit first… Capt Bligh has been totally maligned by history in Hollywood. He was a brilliant seafarer and leader of men, as he showed with his open boat voyage from Tonga to Timor. The reason for the mutiny was the fact that some of his crew wanted to remain in Tahiti with their newfound island loves, instead of going back to England (that wouldn’t have been a difficult decision to make for most young guys in those days!). And here’s another fact about Bligh – Captain Cook was far more liberal with the use of the lash than Bligh ever was. My book “Bligh, Master Mariner” is a bestseller. It (like the majority of my books) is available as an audio and e-book as well as in hard copy.

RS: During the Coronavirus, what are you currently reading when you pick up something to read? How else are you passing the time?

RM: The Hobart race anniversary book took its toll. The research was massive and the deadline pressing. So, I’m taking a breather. That was my 18th book, so I think I’m going to go sailing, or share some good times with friends.

RS: I just saw the list of your books that are available in both the Apple Store and as e-books (i’ve read read most of ‘em) and i’m curious to know what you are writing about now. I’m actually working on my first book during this crisis, so I know you’ve got to be cooking something up!

RM: For some reason I’m under pressure to write an autobiography, but I’m not sure that’s my cup of tea.

RS: Thanks so much for your time Rob. It was a pleasure to chat with you as always and I sincerely look forward to getting to catch up in person, either in your neck of the woods or mine. Stay safe and stay busy!

RM: Absolutely Ronnie, my pleasure. Thanks for the chat and please send my regards to everyone at Musket Cove.

In writing this article and looking up all of Rob’s books, I realized that I have not read his books about Captain James Cook or Matthew Flinders yet! I think i’ll head over to the Apple store and get them onto my iPad to read during my COVID boredom! – Ronnie Simpson.

Lister in the Sun