Part 2 of the article, China Bound….. 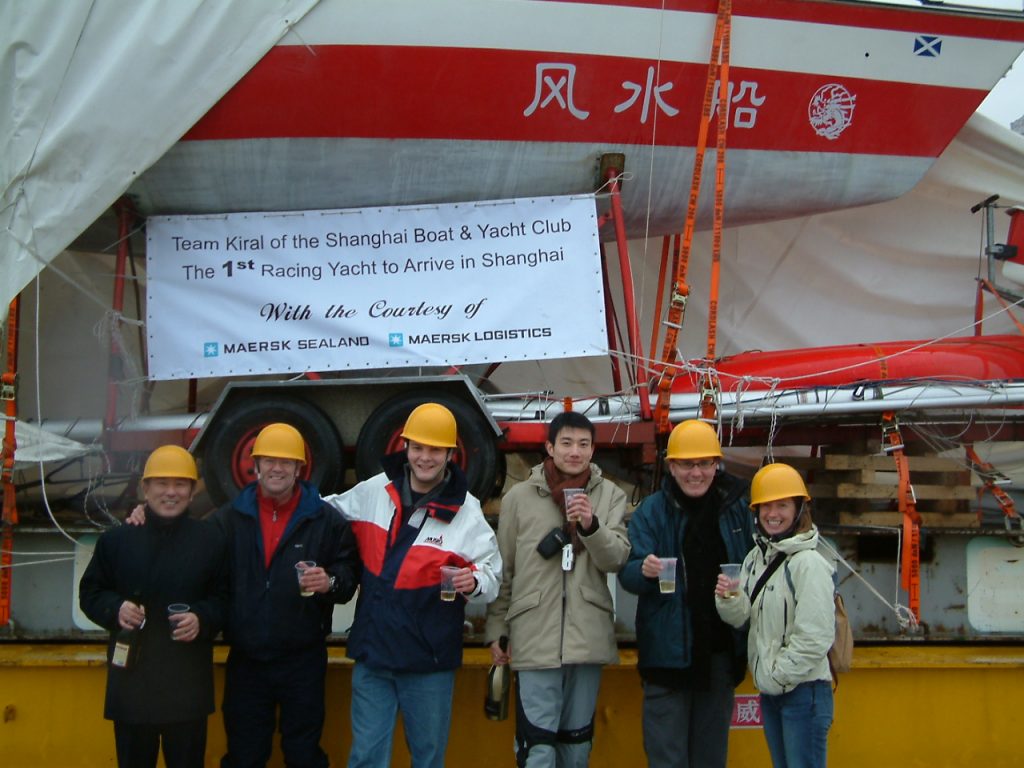 I reckoned though that to have any chance of real growth there needed to be private ownership and thoughts turned to my Quarter Tonner languishing on the hard back in Scotland and in 2003 decided to commit to a career in China and put my house on the market but bringing an 8m yacht halfway round the world would be expensive so I approached some logistics companies for sponsorship.

One of those was Maersk. I would paint the boat blue, put the Maersk star on a new blue spinnaker and call the boat Maersk Shanghai or whatever they preferred. Maersk Shanghai loved it, Maersk China loved it but when it got to Maersk’s main board in Denmark old Mr Moeller who was still with us at that time I am told declared “I have the only Maersk Blue yacht in the world and it is going to stay that way.

However I like what this young man is doing for sailing in China so we will ship his boat for free. All had to do was to get the boat to Felixstowe and Maersk would do the rest, even help with the logistics of customs clearance at the other end. And so with house and furniture sold and all the ‘goodies’ packed into the boat and the back of a 110 Landrover Defender to help keep the weight of the tow down and a Blaze dinghy upside down on her foredeck I started the long overnight drag from Edinburgh to the South of England. I was expected to take no further part until she was offloaded at Shanghai, Maersk wanted no more than some photographs for the in-house magazine, I couldn’t have been more grateful.

Customs was a 6 week adventure, was she personal effects? Or sporting equipment? What duty was due? They didn’t so much re-write the rule book as write a new one and I was told it had never been done before anywhere in China. After much discussion it was agreed then sent to Beijing for final ratification. Within 24 hours they came back and said it couldn’t be done the one way but it could be done another way.

Perhaps because of a loss of face by local customs ( I had had a number of meetings with the head of Shanghai Customs ) the final visit and inspection at the customs bond was little more than cursory. Is it a boat? Yes! Big Tick!, duty paid and she was in. Well in fact they were in, the quarter tonner and the Blaze. That was the start of the private ownership of sailing boats in Shanghai and they were soon followed by a bevy of catamarans, a handful of 470s and almost two dozen Wetas – the club was on its way, website was developed and a regular calendar of racing and training in force. 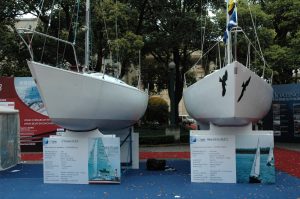 The Quarter Tonner was joined by a second in 2007. Not much point in having a race boat if thee is nothing similar to race against so went looking for a cheap second hand one in Hong Kong to be told by a close friend (my former Vice Commodore) that he knew where there was a brand new one. I of course respectfully reminded him there hadn’t been a new Quarter Tonner for around 15 years – however!

In 1982 the wealthy owner of a boatyard in Hong Kong decided to close the yard. Sitting in the corner of the shed was a 95% complete boat. They had thrown a tarpaulin over it and there she sat for 25 years. She turned out to be an Ed Dubois One Off, 5 designs before the all conquering Police Car, the hole for the keel stepped mast (which by the way was still wrapped in oily brown engineering paper) hadn’t even been cut. A request for plans brought a friendship with Ed himself and he was clearly delighted one of his lost children had been re-discovered. And she’s a witch upwind.