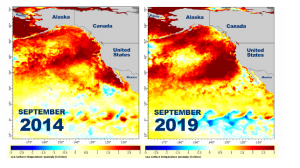 A large marine heatwave would double the rate of the climate change impacts on fisheries species in the northeast Pacific by 2050, according to a recently released study by researchers from the University of British Columbia and University of Bern.

In 2013, a large marine heatwave, nicknamed the ‘Blob’, occurred in the northeast Pacific Ocean. From the coast of Alaska to Baja California, the Blob had a significant impact on the marine life and fisheries in this region; an impact that lasted for several years.

The new study, released in the journal Scientific Reports, combined the latest climate, ocean and fish modelling approaches to quantify the future impacts of marine heatwaves like the Blob on fish stocks along the west coast of Canada and USA. The resulting models showed that future ‘blobs’ would exacerbate climate change impacts on these important fish stocks, causing them to decrease in biomass and generating shifts in their distribution, which, in turn, would impact the fisheries sectors in this region. Read on.

neither surf nor turf