may be the coolest… 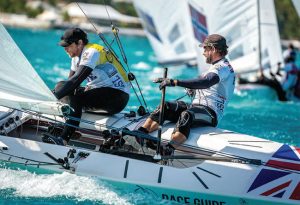 A closer look at the SSL…

For the elite in our sport Nassau in the Bahamas has become an annual pilgrimage for the ultimate international invite-only ‘best of the best’ event, the Star Sailors League Finals and its US$200,000 prize purse. While the SSL Finals happens to take place in Star boats, the name refers to the event’s aim of determining the annual ‘star’ of the sailing world. In December there are few better places to sail than Nassau’s Montegu Bay, well protected with its shallow, warm, Bahamas Tourist Boardpromised turquoise water.

In the early years of the SSL Finals inevitably the Star boat specialists dominated – Robert Scheidt and Bruno Prada claimed the first event in 2013, followed by Mark Mendelblatt sailing with Brian Faith in 2014 and 2016 and George Szabo and Edoardo Natucci in 2015. Since then this has been less true, with Laser and Moth champion Paul Goodison and Frithjof Kleen winning in 2017 followed by Finn Gold Cup winner Jorge Zarif and Pedro Trouche in 2018. However, the 2019 event did see the return to heroes of the Star class, perhaps due to a lighter attendance of Olympic and America’s Cup sailors because of commitments to parallel rival campaigns.

not so private ryan I turned the keys to the M65 over to Ryan Finn last week in New Orleans after a 2,400 mile solo trek with boat in tow from San Francisco. 880 of those miles were on I-10 in Texas