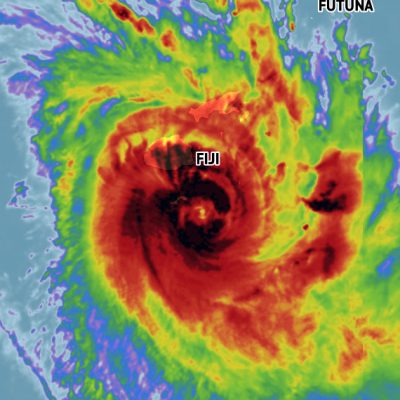 With all of the chaos and disruption to our daily lives right now it’s easy to forget that Mother Nature is still in control and can flip the script whenever she wants to. Partially, though not completely immune to the current problems of the world, many of the smaller island nations in the South Pacific just had their worlds rocked by an intense bastard of a cyclone named Harold. The most powerful storm to develop in the South Pacific basin in more than two years, Harold has now left a trail of destruction across 4 nations.

After developing in between the Solomon Islands and Papua New Guinea on 1 April, Harold immediately claimed 27 lives in the Solomon Islands when a ferry defied cyclone warnings and departed the densely populated capital of Honiara in deteriorating conditions. Despite having zero confirmed cases of the Coronavirus in the country, a nationwide lockdown had been issued and the Prime Minister urged everyone to get home to their villages. Setting off a national race to get home as a cyclone brewed offshore, this was a tragic declaration. The ferry ship MV Taimareho defied warnings not to sail and instead battled the rough conditions before the incident occurred. In the narrow strait between Guadalcanal and her destination on Malaita Island, a ‘huge wave’ slammed the ship and swept 27 of the 738 passengers overboard.

Having claimed life in the Solomons, Harold continued on towards Vanuatu. Rapidly intensifying it became a Category 5 storm before it stalled out west of Vanuatu as a subtropical ridge of high pressure halted it’s progress eastward. Dumping copious amounts of rain and bringing winds over 150 knots, Harold battered Vanuatu for days before finally making landfall and moving further southeast. Particularly affected was the large island of Espiritu Santo. Some 70 percent of the structures in the nation’s second largest city of Luganville have been damaged, with many buildings in the city of 16,500 reduced to their foundation. Official reports on lives lost and damage are understandably delayed.

After her brief encounter with land in Vanuatu, Harold re-intensified and made aim for Fiji. Currently living in Western Fiji on my 34’ sailboat and trying to start a business (hey, it seemed smart 3 or 4 weeks ago), I can be the first to tell you, Harold was a terrifying storm. We went from talking about a good day or two of kiting to prepping for survival in less than 24 hours! Watching the destruction of Vanuatu and the rapid intensification of the storm was awe, and fear, inspiring.

A day before impact, I messaged one of SA’s favorite meteorologists and advertisers, Mark Michaelsen, and said “this thing scares the shit out of me, what do you think?”. He confirmed that Harold was indeed a bad ass storm and that he looked ‘ominous’. Thanks for keeping it real Mark. Riding it out in the very inside lagoon at the famed cruiser hotspot of Musket Cove in the Mamanuca Islands, my position was one of the first in the country to feel the effects of Harold. Most local cruisers and friends rode the storm out in the mangroves up the river by Port Denarau some fifteen miles away. Those guys were fine.

I sent out a “Puff On!!!!!” Instagram story post at 1:18 AM on Wednesday morning. By sunrise it was fully nuking, with puffs well into the 40s, 50s and higher. At maybe 9 AM, my B&G’s topped out at 60 knots, though I was on the bow handling lines when i’m pretty sure two bigger puffs rolled down. With two anchors set off the bow, one line to a tree, two to hard points on land and one to a dock, my Peterson 34 QUIVER held tough, though 60 knots on the beam for a couple hours realllly sucked. 5 miles away at Namotu Island they claimed 100 mph, and if you know those guys, i’m not doubting it. Incredibly, the surf-contest scoring tower at the world famous wave ‘Cloudbreak’ – an iconic landmarker that had stood at the reef for decades – is no longer there. 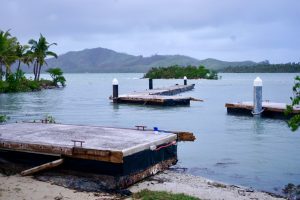 Unlike people on sailboats who have the luxury of moving during a storm, many in Fiji were not as fortunate. While the main island of Viti Levu sustained a lot of damage, it was the fourth largest island in the country, Kadavu, that got hit the hardest. Cyclone Harold basically rolled over the top of Kadavu as a strong Category 4, bringing maximum noise.

As well as likely busting up the rest of the weed crops that the government didn’t take out, Harold hit Kadavu extremely hard and the toll is likely to be very high. Like the Solomons and Vanuatu, details out of Kadavu are thus far scarce, but the Fijian government has sent a ship to the island to assess the damage. As well as the cyclone, at least three tornadoes – very rare for Fiji – were created and ripped through the country, with one severely damaging a school and community.

After having her way with much of the Western and Central regions of Fiji, Harold cruised right over the small, remote island of Ono-i-Lau before heading on towards Tonga where she was said to do a lot of damage to the main island Tongatapu, though again being considered a ‘near miss’. In the midst of a global pandemic which has locked down nearly every country in the region, not to mention shut down the top industry – tourism – hundreds of thousands of islanders have had their lives significantly impacted in the last few days.

The governments of Australia and Fiji have already stepped up to help, but if there’s one thing i’ve learned about living in the South Pacific, it’s that these people are tough and resilient. Even after losing their jobs to the ‘rona, most of these beautiful people are just stoked to be alive. Almost instinctively, these Fijians moved into clean up mode and started making repairs the day after the storm. Seriously inspiring stuff.

Much love and respect to all the people here who have been impacted by Cyclone Harold. Online relief efforts are hard to find just yet, but if you feel compelled to help out in some way, this non-profit called Rise Beyond the Reef has been doing a lot of work to help vulnerable Fijian families maintain food security in the midst of this global pandemic, and now, natural disaster. $18 USD can sponsor a family for a week.

they are the world