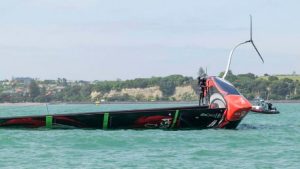 OK, I’ll say it if nobody else will. It’s time to scrap the whole America’s Cup catastrophe and start again. The disruptions of the COVID-19 crisis may be the catalyst, but there have been signs for more than a year now that the pinnacle of our sport took a disastrous wrong turn after Bermuda. This thing is out of control.

The INEOS team photo published recently showed more than 100 staff posing proudly in their team uniforms. That’s more than 100 paid bodies just to keep one boat racing in a handful of regattas. New Zealand, a small nation, is spending countless millions building a port facility for the defense series. The challenge teams are gobbling up sponsorship money at obscene rates.

Meanwhile, it is beginning to dawn on the general sailing community that the foiling monomarans are incredibly difficult to sail in anything other than a straight line. They’ve been testing for a year now yet how many videos of these 75-footers show them completing a successful tack or gybe?

You get the uncomfortable feeling that we’re not being told something.

It may well be that the fundamental design concept of a swing-foil monohull with no keel is flawed – that it may not be possible for these boats to complete a conventional windward/leeward course in a reasonable range of wind strengths and wave heights. When a helmsman with the skills of Ben Ainslie can’t keep a boat on its feet during a simple bear-away gust there must be something wrong.

Then there’s the ridiculously complex set of class rules – all 304 of them, plus their many sub-sections and 100 definitions. This may keep the armies of designers, builders, sailmakers, engineers and computer analysts all nicely employed for three years, but their work is happening at such an abstruse level that it means nothing to ordinary sailors. The America’s Cup has lost its relevance.

Enough is enough. It’s time for the Defender and Challenger of Record to recognize their mistake. Abandon this whole 2021 craziness and start again within a simpler, cheaper framework. The sailing world will thank you.

Jump in the thread and discuss.