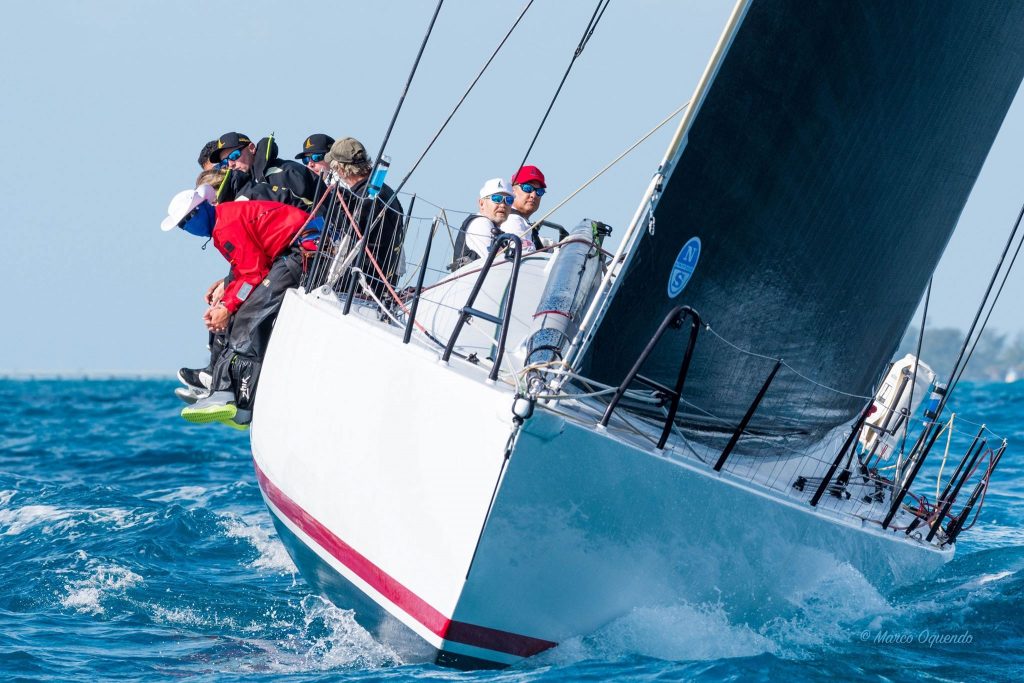 By now it is not news that the legend of Merlin has made its way from the west coast to the east. That happened when owner Chip Merlin purchased the boat from Bill Lee and trucked it to its new home base in Florida. Fast forward a couple of years and a couple more trips across the country, another Transpac, and a mammoth refit that has Merlin in brand new condition, and here you are in South Florida, asking yourself why a boat designed to race downwind to Hawaii was about to start its first SORC race, and head out for a 200+ mile upwind slog out through the Bahamas. There are many twists to that tale, a few of which follow.

Oddly enough, one of the main factors in bringing Merlin to the Bahamas was Hurricane Dorian, which cut its destructive path across the northern Bahamas last September. The first settlement Dorian hit was Hopetown, on Elbow Cay in the Abacos, home to Merlin Project Manager Brian Malone, whose family ties to the island span 9 generations.

Brian is among the principles of Hope Town United, a 501(c)(3) charity that is spearheading the reconstruction of the island as a model of sustainable island development. The flip side of that coin is boat owner Chip Merlin, whose passion for helping those effected by such calamities is matched by his desire to promote the sport of sailing.

Those passions aligned with Merlin and the SORC’s Inaugural Eleuthera Race, from South Beach Miami through the NW and NE Providence Channels, around Eleuthera to the Cape Eleuthera Resort and Marina. Chip was adamant that the team find a race to the Bahamas, to help highlight the ongoing recovery efforts in the islands. The team created the “Merlin’s Miles” program, to gather donations to support Hope Town United, and also won the race’s “Hope Town United” trophy, awarded to the boat that raised the most money for HTU. Visit www.hopetownunited.org for more information on Merlin’s cause.

As for the racing….  The Eleuthera Race started off of South Beach on Wednesday, March 11, with the fleet beating into an easterly breeze in the low teens for the trip across the Gulfstream to Great Isaac. It was the last race of the SORC season series which began in November, with no less than five boats having a chance to win the series in Eleuthera.

This kicked off what ended up being a beat of slightly more than 200 miles, all the way to Spanish Wells, on the northern tip of Eleuthera. Merlin, back to her original white/red paint scheme, with new Offshore Spars carbon rig and boom, and many other upgrades, goes upwind just fine, though neither boat nor crew find the experience altogether enjoyable (except when Jeff Linton is on the helm). Once around Spanish Wells, the experience became infinitely more tolerable, with blast reacher and genoa staysail punching the speeds up well into the teens. We finally got a chute up (A3) for the 30 mile stretch to the southern tip of Eleuthera, which was as close to “Fast is Fun” as we got.  That took speeds up to 20 at the peak, and quickly got us around to the leeward side of the island for the calm and quick 15 mile NW hitch to the finish at Cape Eleuthera.

The arrival at this amazing place was among the better dock greetings I’ve had.  It was not Transpac arrival, but it was stellar.  When it was apparent that we were not going to be having dinner during the fun but rough ride down the east side of the island, we texted the resort to put in a special order. We arrived at our slip in one of the very few Bahamian out island resorts that can accommodate Merlin’s 10.5′ draft, to find a huge Yeti cooler stocked with Kalik, Heineken, a couple of bottles of Mt. Gay, sodas, waters, etc., as well as to-go food boxes of conch, chicken, burgers, etc., for the entire crew.

The Eleuthera Race has taken the place of the Havana Race as the final event of the SORC season series, now that Americans are not free to travel by boat to Cuba. With Cuba out of the picture, finding a destination in the Bahamas that could accommodate deep draft boats, and the number of crew in the fleet became the challenge. Cape Eleuthera was the answer, and is more than able to accommodate the fleet and crowd. The amazing scenery and service was topped only by the final awards dinner party on the beach, watching the sunset, followed by a bonfire and fireworks show. We piled into a pair of charter planes the following morning for the trip back to Lauderdale, and returned to a Very different country than the one we left just a few days before.

made in the usa